The Requested Resource Is in Use: Cluster Disk Error in Windows Server 2012 R2

After the emergency shutdown, one of the cluster disks connected to the Microsoft Failover Cluster in Windows Server 2012 R2 fell down. Having opened Disk Manager on one of the cluster nodes, I saw that this disk was online, but the file system was recognized as RAW.

When trying to open the contents of the disk in the Explorer, the following error appeared:

Y:\ is not accessible

The requested resource is in use 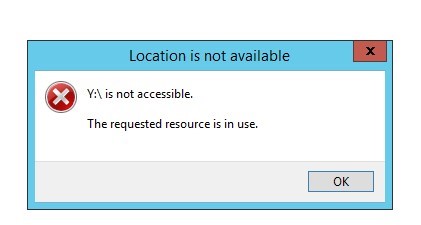 I tried to disconnect the disk and reconnect it, tried to deal with the problem with the help of diskpart, TestDisk and other utilities, but nothing helped. The disk was still detected as RAW. Really all the data on the disk disappeared !?

As it turned out, the disk could be considered in use or be exclusively reserved by some other cluster node(s) after the emergency shutdown or uninstallation of a cluster.

After that I just ran Rescan in the Disk Manager. Then the disk was displayed correctly and ran successfully in the Failover Cluster Manager console.

Same here. Works like a charm on Server 2K16 as well.