If you check what updates are installed on your computer through Windows Update every month, you may have noted the critical update KB890830 (Windows Malicious Software Removal Tool). This update contains the latest version of Windows Malicious Software Removal Tool (MSRT) by Microsoft. This tool can scan and clean your computer for viruses, trojans, worms and other malware. MSRT is available for all supported Windows versions (including Windows 7 which is currently not supported).

Microsoft Windows Malicious Software Removal Tool is not an antivirus and doesn’t protect your computer in real time from all threats. The scope of the tool is to quickly scan a computer for a limited number of the most dangerous malware and threats (in Microsoft opinion) and to remove them.

You can install/update MSRT automatically via Windows Update, or manually download and install the Windows Malicious Software Removal Tool (KB890830) from the Microsoft update catalog (https://www.catalog.update.microsoft.com/Search.aspx?q=KB890830).

Since May 2020, the MSRT update is released once in three months (previously it was monthly).

To use the Windows Malicious Software Removal Tool, run this command: 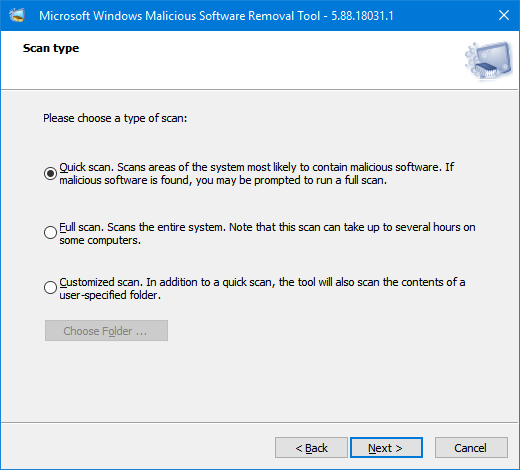 Select the scan type you want and wait till the scan is over. 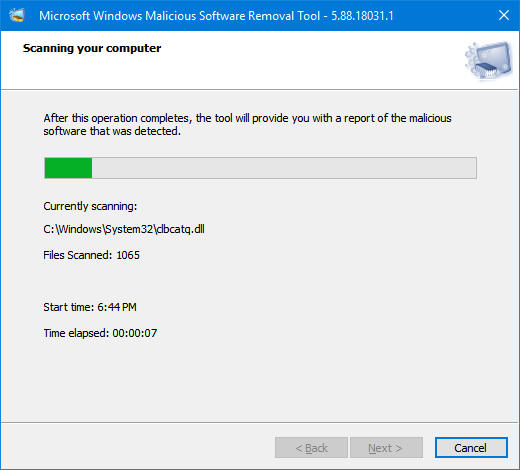 If no infected files are found, the tool will show the message “No malicious software was detected”. If you click “View detailed results of the scan,” the list of malware which signatures have been looked for will be shown and scan status for each of them.

If any malware has been found, the tool shows one of the following statuses: 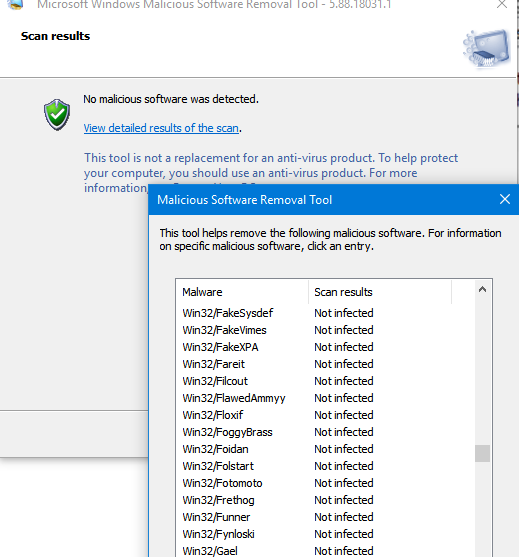 MSRT saves a detailed scan log to the file: %WinDir%\Debug\mrt.log.

Note the last line of the log (Heartbeat Report). As you can see, Malicious Software Removal Tool sends a report to Microsoft (MSFT says it is anonymous). You can disable sending scan reports to Microsoft through the registry. Create a REG_DWORD parameter with the name DontReportInfectionInformation and value 1 under the reg key HKLM\SOFTWARE\Policies\Microsoft\MRT.

If you want to disable the automatic download and installation of the Malicious Software Removal Tool via Windows Update, run this command:

MRT.exe has several command line options you can use to scan computers in a corporate network (using SCCM, GPO or similar tools).

The task runs mrt.exe with /EHB /Q (it is interesting that /EHB options are not described in the official documentation, there is no mention about them in the help).

How to Clean Up Large System Volume Information Folder on Windows?