How to Upgrade VM Hardware Version in VMWare ESXi

The compatibility of ESXi and VM versions is shown in the table below.

You can see the current virtual machine (virtual hardware) version in the Summary tab of the virtual machine. The screenshot below shows that VM version 8 (ESXI 5.0 and later) is being used. 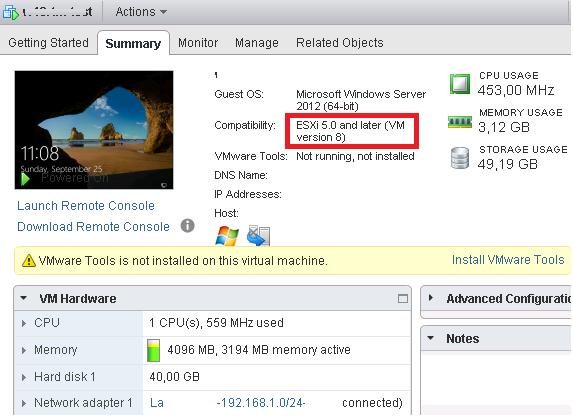 Before upgrading the VM version, it is recommended to: 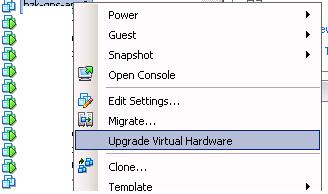 When upgrading the virtual hardware version to 10 or 11 from earlier versions, you will be able to edit VM settings only in vSphere Web Client interface. If you try to change them in vSphere Client, the following error appears:

Restricted Virtual Machine Settings
You have restricted editing capabilities on a virtual machine of version 9 or higher using this client.
Some devices may not appear in the devices list, and the settings of some devices may appear as “Restricted”.
If you want to edit the advanced hardware features of this virtual machine, please use the vSphere Web Client

You can schedule an automatic upgrade of VM version after the next correct VM restart.

If you are using a free ESXi version (VMware vSphere Hypervisor), you won’t be able to upgrade it in PowerCLI due to some API restrictions. But you can use vim-cmd command in ESXi shell:

Remember VMID to be upgraded:

Start VM and make sure that it has been upgraded to VM version 11.

Adding a Sound Card to a Virtual Machine...