Workstation Logon Restrictions for AD Users (Log On To)

Restricting User Account to Logon Only to the Specific AD Computers

In small domains you can restrict the user logon to domain computers in the properties of each user account in the Active Directory. For example, you want to allow a specific user to log on to his computers only. To do it:

How to Modify the LogonWorkstations Attribute in PowerShell?

It is quite tiresome to restrict user logon to domain computers manually. You can automate this action with PowerShell. The list of computers a user is allowed to log on to is stored in the AD user attribute “LogonWorkstations”. For example, our task is to allow a specific user to log on only to the computers, which names are listed in the text file computers.csv.

Using the Get-ADUser cmdlet, you can display the list of computers a user is allowed to log on to.

Or you can view the list of computers in the ADUC console.

To add a new computer name to the list, use this command:

How to Restrict Users to Logon to the AD Workstation Using GPO?

In large domains, it is not feasible to use LogonWorkstations user attribute to restrict user access to computers due to some limitations and the lack of flexibility. Usually to prevent users from logging on to some computers, group policies are used.

You can restrict the list of users in the local group Users using the Restricted Groups policy (Windows Settings -> Security Settings), but we’ll consider another option.

For example, to prevent users of a particular group from logging on to computers in the certain Active Directory OU, you can create a separate user group, add it to the Deny log on locally policy and link the policy to the OU containing the computers you want to restrict logon to. 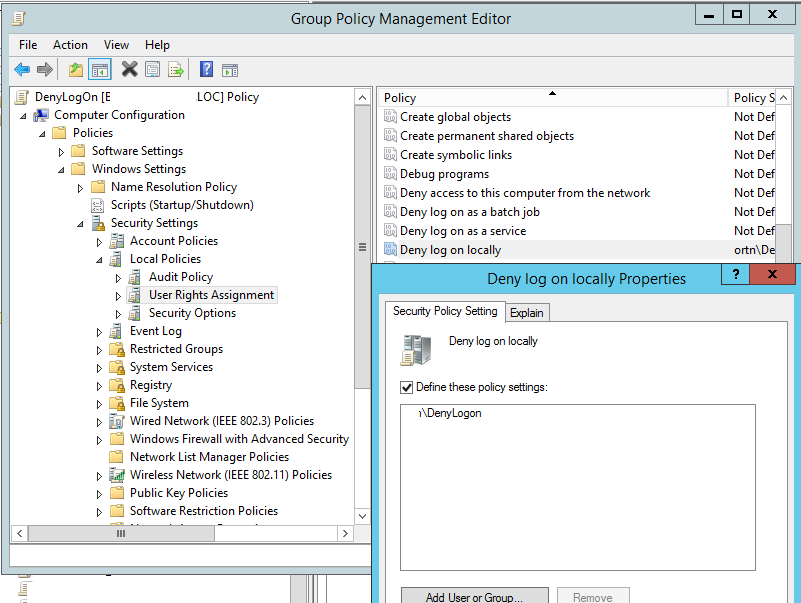 In large AD domains you can use a combination of these policies. For example, you want to restrict users from logging on to computers in other OUs.  To do it, create a security group in each OU and add all OU users to it.

Tip. Users of the specific OU can be automatically added to your security group using the Get-ADUser and Add-ADGroupMember PowerShell cmdlets with the help of the following script:

Then enable the “Allow log on locally” policy, add this group to it (as well as different administrator groups: Domain Admins, workstation admins, etc.) and assign the policy to the OU with the computers. Thus, you will allow only the specific OU users to log on to the computers.

If a user from different OU (who is not allowed to log on locally) tries to log on computer, a window with the following message will appear:

You cannot log on because the logon method you are using is not allowed on this computer.  Please see your network administrator for more information.

The sign-in method you are trying to use isn’t allowed. For more info, contact your network administrator.

Here are some important notes regarding logon restriction policies: