The warning ‘Virtual Machine disks consolidation is needed’ in the Summary tab of a virtual machine in the VMware vSphere Client console means that when deleting snapshots (using the Delete or Delete All options), there were files left on the disk that could not be merged (committed) with the main virtual disk file (vmdk). As a result, you cannot backup such a virtual machine, and its performance is degraded.

The most typical causes of the ‘Virtual Machine disks consolidation is needed’ error are:

How to Consolidate Disks in VMware?

A window with the following request appears:

Confirm that you want to delete the redundant logs. Then vCenter will consolidate disks and clear the logs. The consolidation process can take a long time depending on the size of the VM, the number of snapshots, and the current host/datastore load. During consolidation, VM performance may degrade. Wait for the “Consolidate virtual machine disk files” task to complete.

When consolidation is performed, data from the delta disks are merged with the main disk and unnecessary files on the storage are removed. After that, the warning of the VM consolidation will disappear.

In some cases, when performing a consolidation you may see this error in the vSphere console:

In this case, VMware recommends restarting Management agents on the ESXi server. To do it, connect to the ESXi host via SSH and run this command:

If this doesn’t help, check who has locked the virtual machine files.

Also, you can try to unlock the VM files as follows: 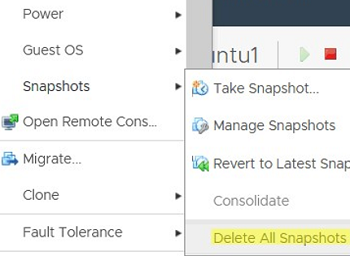 If the Consolidate option is inactive in the VM menu (grayed out button), and there are still a large number of delta snapshot files in the datastore, the integrity of the snapshot chain is most likely broken (error: Unable to enumerate all disks).

Try to manually remove the VM from the list (Remove from Inventory) and re-register the VMX file of the virtual machine from the Datastore Browser. If this doesn’t help, check and fix the errors in the snapshot chain as described here: The parent virtual disk has been modified since the child was created (https://kb.vmware.com/s/article/1007969).

You can find all virtual machines that require consolidation using PowerCLI (this module allows you to manage VMware infrastructure). To do it, connect to your vCenter server or ESXi host:

Get the list of all VMs with the status ‘Virtual machine disks consolidation is needed’:

Now you can consolidate the disks of all virtual machines in the list:

How to Fix the ‘Too Many Open Files’ Error in Linux?

How to Enable and Configure SSH Server on Windows with OpenSSH?