Could not Reconnect All Mapped Network Drives on Windows 10

Windows 10 for some reason stops automatically mapping network drives after restarting the device. Mapped network drives are displayed in File Explorer, but you cannot connect to them.

In this case, a pop-up window appears in the notification area with the alert:

The problem occurs both with mapped drives connected from NAS devices, and with shared folders on other Windows / Linux computer. This bug first appeared in Windows 10 version 1809 and, according to Microsoft, was fixed by the KB469342 update released on December 5, 2018 (addresses an issue that may cause mapped drives to fail to reconnect after starting and logging onto a Windows device). But the problem occurs in new Windows 10 builds as well.

You can manually download and install the update from the Microsoft Update Catalog.

Microsoft also offers a workaround to the problem of restoring connectivity to the mapped network drives (see KB4471218 — Mapped network drive may fail to reconnect in Windows 10, version 1809). To do this, it is suggested to run a PowerShell script at user logon. If network drives are connected via Group Policy, you need to change the GPO settings.

Let’s look at how to use a PowerShell script to automatically reconnect mapped network drives when a user logs on to Windows.

Run the notepad.exe, copy the following PowerShell code into it, and save the file to the C:\PS directory as MapDrives.ps1: 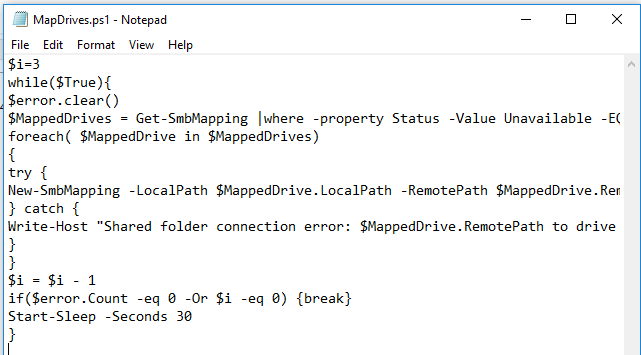 This script selects all inaccessible mapped drives and tries to reconnect them in persistent mode.

This code allows you to bypass the PowerShell execution policy and run the PS1 script described above. You can put this batch file into the user’s startup by copying the MapDrives.cmd file to the %ProgramData%\Microsoft\Windows\Start Menu\Programs\StartUp folder.

You can also create a scheduled task to run the MapDrives.cmd file when a user logs on. You can create a scheduler task using PowerShell or from the Task Scheduler GUI console (Taskschd.msc).

If you map network drives to users using domain Group Policies, you need to change the policy settings in order to connect the drives correctly.

Open the GPO that connects the drives, and in the section User Settings -> Preferences -> Windows Settings -> Drive maps, find your network drive assignment policy (policies) and change the Action type from Update to Replace 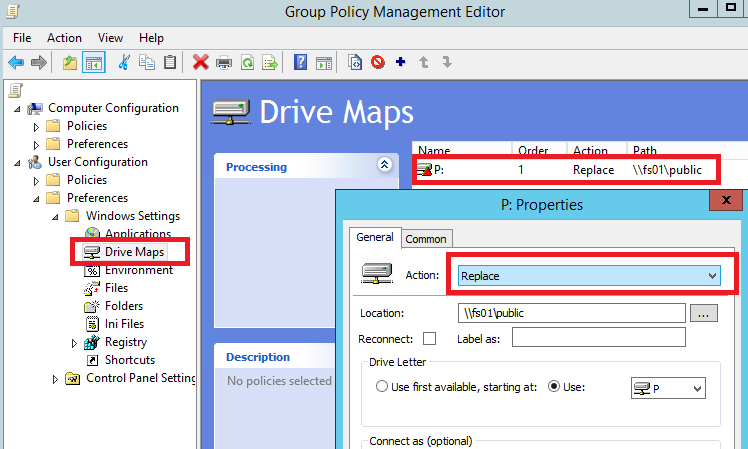 After updating the Group Policy settings on clients, the mapped network drives will be removed and reconnected when the user logs on.

In order to fix this problem, you need to add the parameter ProviderFlags=1 to the user registry for each mapped network drive.

For example, if the user has a network drive U: mapped in the session, go to the registry key HKEY_CURRENT_USER\Network\U. Create a DWORD named ProviderFlags with a value of 1.

Or run the command:

Windows may try to reconnect network drives at user logon before the network interface is fully initialized. To prevent mapped drives from connecting until the network is fully enabled, you can configure a specific Group Policy setting.

You can configure this setting through the Local Group Policy Editor (gpedit.msc) or from the Domain GPO Editor (gpmc.msc). Go to Computer Configuration -> Administrative Templates -> System -> Logon and enable the Always wait for the network at computer startup and logon policy. 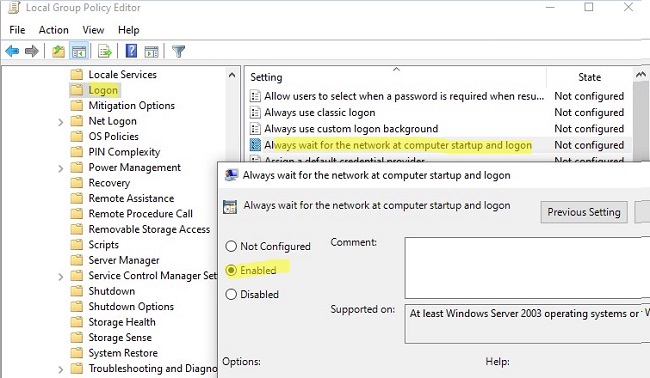 You can also fix this problem if you just wait 15 seconds after booting your computer (or exiting from the hibernation/sleep mode) before logging in. This time will be sufficient for Windows to initialize the network.

Disable Could Not Reconnect All Network Drives Notification

If your computer is located not on the corporate network (network drives are not available by design), and you are bothered by the annoying “Could not reconnect all network drives” notification every time Windows boots, you can disable it.

To do this, go to the registry key HKEY_LOCAL_MACHINE\SYSTEM\CurrentControlSet\Control\NetworkProvider, and create a new DWORD parameter with the name RestoreConnection and value 0.

KB4469342 – fix for the Mapped Network drive bug in Windows 10 1809:
Addresses an issue that may cause mapped drives to fail to reconnect after starting and logging onto a Windows device

I got the solution of WIndows 10 map network drive connect.
Please install MediaCreationTool1809 and switch on firewell setting. then restart your system.
You’ll got activate your map network drive.

This does not work at all.

i tried and its working
install https://go.microsoft.com/fwlink/?LinkId=691209
MediaCreationTool1809 and install it after installation just check your network setting and allowed to network sharing.
now check it’s work fine.

Here it is March 2021 and I’m landing back on this page, so obviously Microsoft as usual can’t make a fix and keep it fixed. This one described above actually worked for me. One tweak I had to discover on my own was to ensure the user credentials were added as windows credentials. Group policy notes above should be called out as not available without additional hacking up windows on home edition. I just don’t get how microsoft can’t do the simple things reliably in this day and age. Power plan settings, need I say more.

In my opinion, the problem will be solved if you add a .bat file in the boot menu and use the “net use” command with the “/ persistent: no” option. This will cause that the disk will not be remembered after logging out, but added again every time you log in. In my case, WIN10 no longer causes a drive mapping error.