How to Backup Hyper-V Virtual Machines?

Although the Hyper-V environment provides quite a lot of technologies of high availability and fault tolerance for running virtual machines (such as failover clusters, Live Migration, replication, etc.), an administrator must implement traditional ways to back up virtual machine instances. All these technologies can minimize the VMs downtime in various scenarios, but do not provide any disaster recovery options due to human errors, hacker or virus attacks, competitor attacks or similar circumstances. In this article I will try to review the basic requirements for Hyper-V backup solutions, backup strategies and the features of free and commercial backup products.

You can backup virtual machines running on the Hyper-V host using the built-in Windows Server Backup features (or wbadmin scripts based on it), as well as other free or commercial products. All of them are using snapshot (checkpoint) technology to backup running Hyper-V VMs. A checkpoint is a state of a virtual machine at some point of time. The checkpoint stores the state of virtual disks, the contents of RAM, as well as the settings of a VM.

How Does the Hyper-V Virtual Machine Backup Work?

Note. Previously, server backup was performed by a backup agent installed on each host. In the virtualization era the backup creation point has moved from the guest OS to the Hyper-V host, on which VMs are running. Currently, agent backup scenarios are rare, and are mostly used for the specific apps that do not support VSS.

The backup tool instructs the Hyper-V host to create a checkpoint. After receiving the command, the hypervisor creates some new files (delta files) and the VM goes on working and starts saving changes in the files. Now the backup tool must copy the original VM files (no changes are written to them) to the backup media and then delete the checkpoint. When deleting the checkpoint, Hyper-V consolidates (merges) the original and delta files, in the meantime the VM goes on working. If you lose the productive VM, you will be able to recover its state at the point of time when the backup was created.

This is general information about the Hyper-V backup, but actually, there are a ton of nuances and issues. I will try to list the most common problems:

Next, we’ll consider some common solutions for Hyper-V VM backup based on the features described above.

A free way to organize VM backup on Hyper-V suggests using the built-in Windows Server Backup feature. You can use WSB via the graphic backup/restore wizard or the wbadmin command-line tool (it is a part of WSB). Windows Server Backup supports VSS and incremental backup. This feature is available both on Windows Server 2012 (and newer) and on Hyper-V Server. To install WSB component, go to the Server Manager console or run this command:

Windows Server Backup has the GUI console (wbadmin.msc) that allows to create and manage Hyper-V backups, create backup schedule, etc. To backup a VM, just start a simple wizard, select which VMs from your Hyper-V server have to be backed up and where the backups are to be saved, and specify the backup schedule. 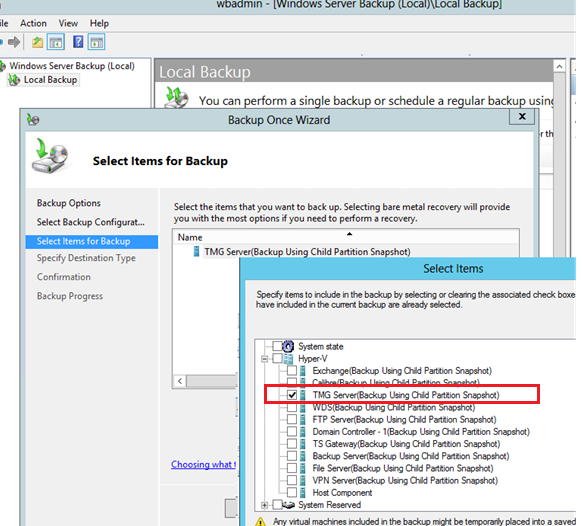 Tip. In Hyper-V Server versions before 2012 you could not create a backup of a single VM using the built-in backup tool – all VMs were backed up at once.

Usually, it is easier to use the command prompt to backup a Hyper-V VM. Moreover, you cannot create more than one VM backup task in the graphic interface, and the task will overwrite all previous backup tasks. 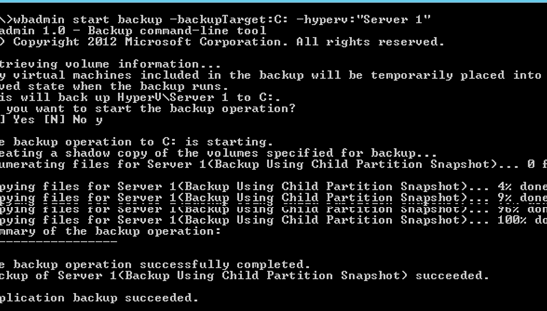 For example, to back up two VMs and save them to a network shared folder (suppose, it is the external NAS storage), it is enough to run the following command:

You can add this command to the Windows Task Scheduler using PowerShell and thus schedule regular VM backups (older backups will be removed in this case).

For example, to backup a VM with the AD domain controller, you can reset the AD transaction logs after the backup is over in order for the ADDS database in the backup to be consistent (in the same way you can back up a VM with Exchange or SQL Server):

To get the list of backups registered in the system, run this command:

Tip. Please note that when you backup a VM on the Hyper-V host running Windows 2012 or newer, the VM is not paused (suspended) if it has Hyper-V integration components installed.

WSB is a simple, but reliable solution for Hyper-V VM backup. It is quite fast and allows to manage the backup schedule. However, Windows Server Backup has its drawbacks:

It is impossible to use the Windows Server Backup if there are a lot of Hyper-V hosts and virtual machines. In this case you will have to choose one of the third-party solutions. You cannot say for sure that this or that product would be an ideal solution for Hyper-V backup since there are a lot of things to be considered. They include the number of hosts, licensing limitations, necessary features, network architecture, etc.

There are many commercial and free backup products in the market, and it is hard to choose the right one. Usually, Gartner magic quadrant is used to determine the niche leaders. I have found this image that shows the main players and leaders in the market of backup solutions for data centers in 2019. 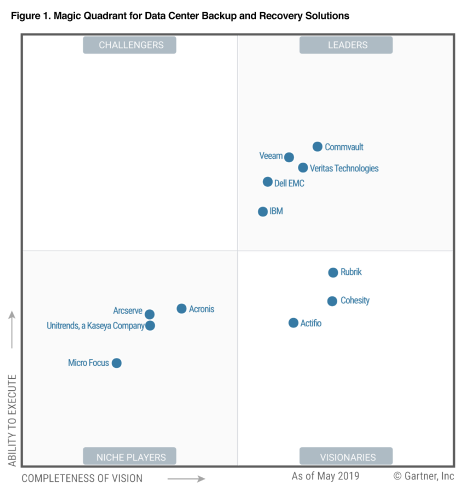 As you can see, Gartner names the following companies and products among the leading providers of backup solutions:

The Disk is Offline Because of Policy Set by an Administrator

Thanks for the detailed insight. I still have a weird effect, which I didn’t read anything about in here. I have a Hyper-V Server with two VMs on it. We use WSB. We configured it as a full backup of the Host and the VMs are selected for backup. There are no errors in the backup, but if I look into the details of the backup, I have no data transfer of the VMs. Is this normal? May the reason be, that there have been no changes on the VM?

Do you have instructions on how to restore the WSB backup of a VM?