Sometimes it happens that the security updates for Microsoft products (released under MS Patch Tuesday) cause problems with the OS or third-party software. The issues caused by the updates can be either mass and occur in a large number of devices or private that occur in some combinations of the Windows OS version and some apps.

If the Windows (or Office) patch causes a problem on the computers of many users, and this is confirmed by Microsoft experts, the update is pulled by the company and after a while is replaced by a new one with the bugs fixed. But if necessary, in Windows there is a way to uninstall any security update or patch.

In this article we’ll show how to properly uninstall updates in Windows OS (the article covers Windows 10, 8.1, 7 and Windows Server 2016, 2012/R2, 2008/R2). These ways of removing updates can be used if you installed the update manually from a CAB or MSU file, your device automatically received it from the Windows Update servers or your WSUS server.

There are several ways to uninstall updates in Windows (Windows Server):

Contents:
Warning! The opportunity to uninstall updates is a temporary solution to be used, firstly, to quickly restore a system or an app and, secondly, to confirm that the issue has been caused by the new security update. It is recommended to report the found problem to Microsoft technical support team and wait for the new version of updates to appear. Never disable automatic Windows update, neither uninstall updates in order to improve the performance of your system, nor to free up some space on the disk (to do it, the latest Windows versions have the cleanup wizard that allows to remove older versions of the updated files). Otherwise, your computer’s security is at serious risk!

How to Uninstall Windows Updates Using the Control Panel? 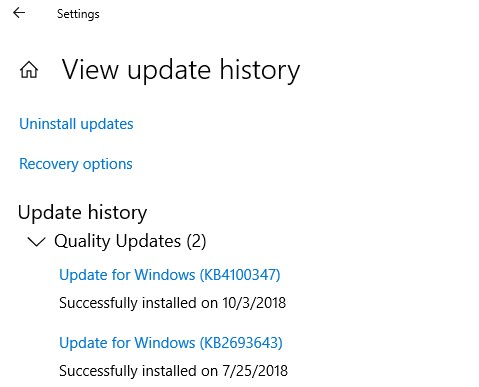 You can also go to the “Uninstall an update” panel using the classic Control Panel (Control Panel\Programs\Programs and Features) and press the button “View installed updates”. 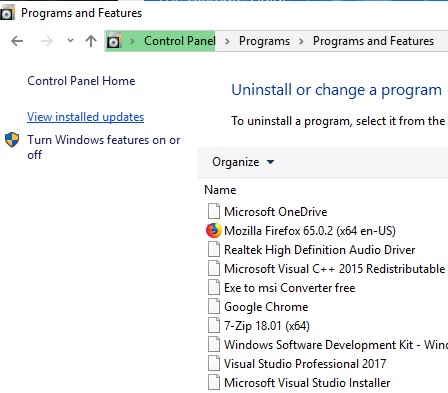 A list of all Windows and Office updates installed on your device will appear. Find the necessary update in the list (or, to be more precise, unnecessary :)), select it, click the Uninstall button. The uninstall update wizard starts. 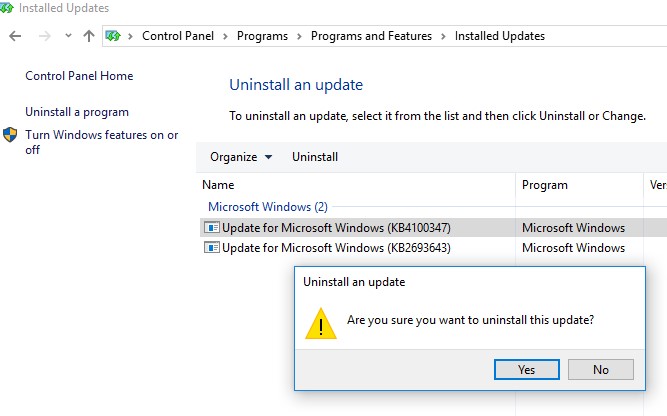 Click Yes when prompted if you want to uninstall this update.

And wait till it is uninstalled. After the update is removed, Windows may request a system restart.

How to Prevent (Block) a Specific Update from Installing in Windows 10?

If your computer is configured to automatically receive Windows updates through Windows Update or WSUS, this update will most likely be installed on your computer again. But you can prevent the installation of a specific update by hiding (blocking) it. To do this, use the official tool Microsoft Show or Hide Updates https://support.microsoft.com/en-us/help/3073930/how-to-temporarily-prevent-a-driver-update-from-reinstalling-in-window

Windows updates can also be uninstalled from the command prompt. To do it, there is a built-in CLI tool wusa.exe (Windows Update Standalone Installer).

You can list all updates installed on a computer with the command:

Using the following command, running as administrator, you can remove the specific update (KB 4100347):

A user must confirm the removing of the update. 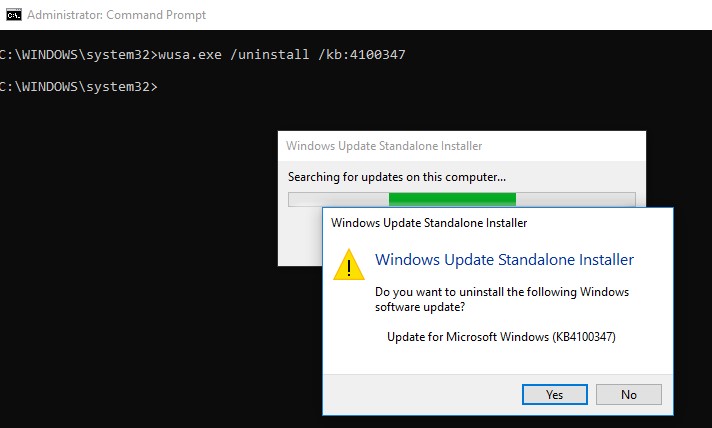 If the update has to be uninstalled in a quiet mode without a user request and notifying about of the subsequent system reboot, the command will look like that:

If you need to suppress the reboot request, use the command:

You can also remove the update from PowerShell using the PSWindowsUpdate module. The Remove-WindowsUpdate cmdlet is used:

The Windows update uninstall event is recorded to the Setup log with the EventID 7 from the WUSA source: 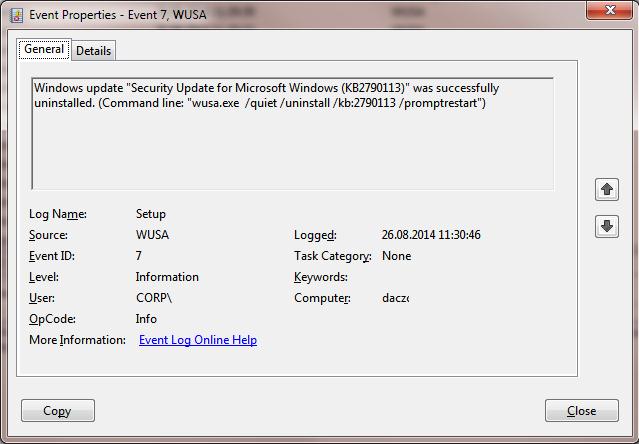 Using PsExec you can uninstall an update on a remote computer, the command is as follows:

How to Uninstall a Windows Update using WSUS?

If a corporate WSUS server is used in your company to install updates on a domain computers and servers, you can remove the update approved for install using the Update Services management console. To do it, right-click the Updates branch and then click Search in the menu. 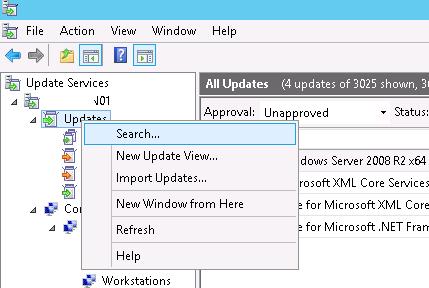 Specify the KB number or a security bulletin you need to find and click Find now. In the list containing the updates that have been found for different Windows versions, select the updates to be uninstalled and click Approve in the menu. 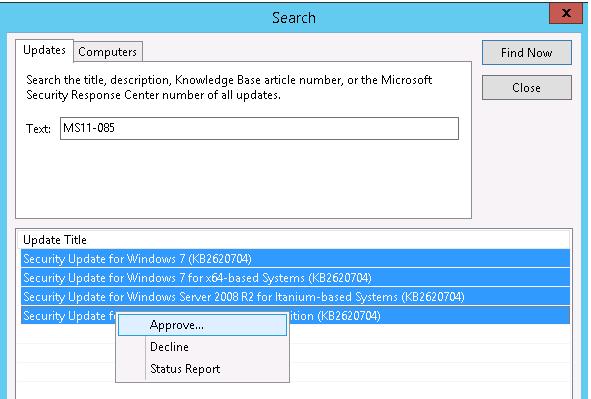 Then select the WSUS Target group you need and choose Approved for Removal in the drop-down list. 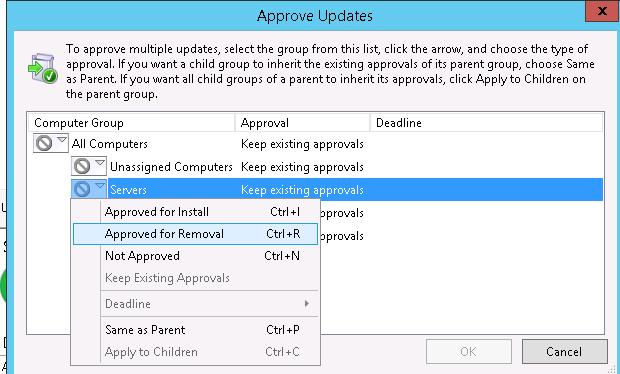 In our example, we want to uninstall update on a group of computers named Servers (more about WSUS GPO targeting).

After updating data on the side of WSUS clients (which occurs on a schedule in accordance with the WSUS policy and the synchronization frequency, which is set by the Automatic Update detection frequency, or can be done manually by running wuauclt /detectnow) , the corresponding update appears with the prefix (Uninstall:) in its name in the Windows Update panel.

After the update has been uninstalled, this event is displayed in Windows Update History.

If you want to remove a specific update on multiple computers of Active Directory domain that doesn’t use WSUS, you can use Startup/Shutdown GPO scripts.

To do it, create a new GPO object linked to the necessary OU, AD site or computer group. Then create a new startup script with the wusa.exe command in the section Computer Configuration -> Policies -> Windows Settings -> Scripts (Startup/Shutdown). 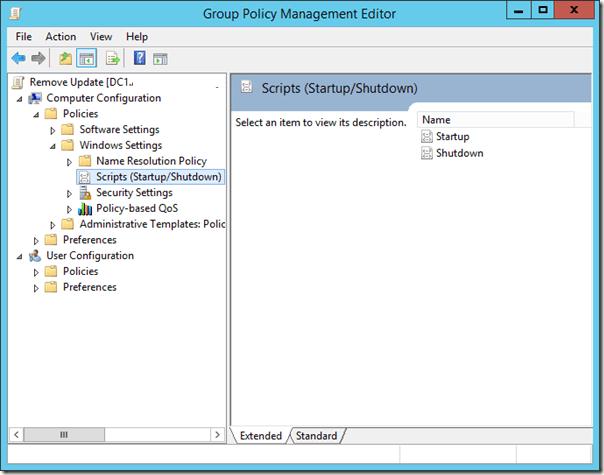 You can also use PowerShell startup scripts to remove installed updates.

How To Uninstall Windows Updates When Computer Is Not Booting?

Sometimes it happens that you cannot remove an update directly from the Windows, since the OS simply not booting after installing the problematic update. In this case, you may have to boot the computer from the rescue or install boot disk and delete the updates via DISM (see the article “Computer Won’t Start After Windows Update”) or using the “Hotfix uninstall” utility from the MSDaRT.

So, we have covered common scenarios of how to uninstall updates on Windows computers.

Please note that you cannot remove installed updates if you have cleaned your system image from old versions of components using the Disk Cleanup tool or reduced the size of the component store (WinSxS) with the command:

please i wish to kwon which are the causes of windows 10 upgrade stuck at boot logo without no spinning dots. I must attempt install only with 1gb of ram, change the hard disk, or whatever.

“no instance available” gives this error

Have you encountered an error “no instance available” then running wmic command? I think it’s means that the resulting KB list is empty (no updates are installed on the computer). What is your version of Windows? Check build number : Win+R -> winver.