If you see the “The application has failed to start because its side-by-side configuration is incorrect” error when trying to start an app in Windows, this means that the program cannot start due to missing dependencies. The components required to run the app are damaged or not installed on the computer. In this article, we’ll show how to check an application’s manifest file and resolve dependencies by finding a library or a package to be installed in order for the app to start correctly.

Most often the problem occurs when running portable apps or games because they use libraries of the Microsoft Visual C++ Redistributable (vc_redist.x86.exe, vc_redist.x64.exe) that are not installed on a computer or corrupted. However, prior to installing all Visual C++ Redistributable versions on your computer without thinking, we will try to find out exactly which library the app needs by its manifest file.

How to Analyze an App Manifest in Windows?

Let’s try to start the makeappx.exe application on a computer having no Windows SDK installed.

Obviously, the tool doesn’t start and returns an error:

Note the ResourceUnavailable message, it directly points to the fact that the app is missing something to run.

The list of components and libraries an app needs to run is specified in the app manifest. The app manifest may be stored as a separate XML file or embedded directly into the application’s executable (.exe) file.

You can view the EXE file manifest using the free Manifest View or Resource Hacker tool.

We showed how to use Resource Hacker to view and edit an app manifest in the article How to suppress UAC elevation prompt?.

As you can see, the Dependency section in the app manifest contains a reference to the Microsoft.Windows.Build.Appx.AppxPackaging.dll. The application cannot work without this library file. 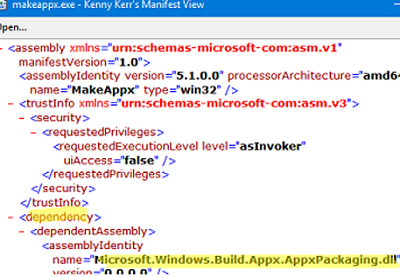 You can also trace application startup using the SxSTrace.exe.

Then run the problem app. When the “The application has failed to start because its side-by-side configuration is incorrect” error appears, stop the tracing by pressing ENTER in the sxstrace window.

Open the resulting TXT file in the Notepad (or any other text editor) and find the lines with errors. You can also grep for errors in the text file with PowerShell

As you can see, the error points to the same DLL file shown in the app manifest:

Additionally, you can analyze the SideBySide dependency errors with the event logs. If the error occurs, the following event is written to the Application log:

The error description mentions a library file or a component necessary to run an app.

Then open Google and search for information on this dll. In my example, the library file is a part of the MSIX Toolkit from Windows SDK (Redist.x86). Download and install the components you have found to let the app start correctly.

In most cases, the “incorrect side-by-side configuration” error is related to a missing or corrupted version of the Microsoft Visual C++ Redistributable library.

In this case, the following error will appear both in sxstrace log and in the app manifest:

We get the following information from this message: the app needs a x64-bit Microsoft.VC90.MFC 9.0.21022. A quick search in Google shows that it is Microsoft Visual C++ 2008 Redistributable. Download and install this MVC version from the Microsoft website.

In the same way, you can get other Microsoft Visual C++ versions by their values in the Version field:

If you understand that the app startup error is related to one of Windows system files, check and repair Windows system image files and components using SFC and DISM: