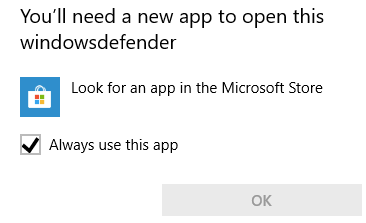 The problem is caused by a corrupted or missing built-in Windows Security UWP app. Microsoft Store in this case cannot find the app on your computer to open the link.

This Windows Security problem may appear:

First of all, try to reset the Windows Security app settings. Open the PowerShell console as administrator and run the command below:

The command may return that Microsoft.SecHealthUI is not found:

Make sure that the folder with Windows Security application exists on your disk:

As you can see, the Windows Security app is located in C:\Windows\SystemApps\Microsoft.Windows.SecHealthUI_cw5n1h2txyewy. Make sure that the folder exists on the disk, you have NTFS permissions to access it, and there is an app manifest file (AppxManifest.xml) in the folder. 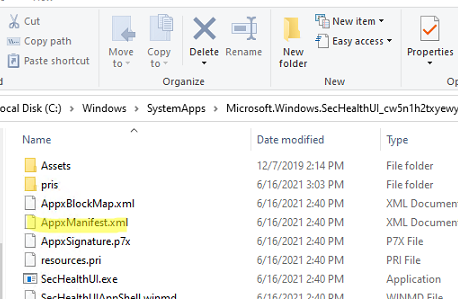 Then try to open the Windows Security settings window from the Settings menu.

If the Settings app in Windows crashes/does not open, you can reset it as well.

If there is no folder with the app, you may try to restore it from the Windows component repository using the DISM and SFC commands:

If the “Threat service has stopped. Restart it now” error appears when you try to run the Microsoft Defender Antivirus, fix it by following these instructions.

How to Reset an Active Directory User Password with PowerShell and ADUC?

Enable or Disable MFA for Users in Azure/Microsoft 365