The complexity of a user password in Active Directory domain is one of the key security elements both for user data, and the entire domain infrastructure. Many users prefer to use simple and easy-to-remember passwords despite the recommendation not to use personal info, dictionary words and simple combinations as passwords. In this article, we we’ll show you how to audit Active Directory user passwords, find weak and simple passwords using PowerShell.

How to Install the DSInternals (Directory Services Internals) PowerShell Module?

In order to compare hashes of user passwords stored in the Active Directory database (ntds.dit file) with a dictionary of simple and common passwords, you can use a third-party PowerShell module – DSInternals. This module contains a number of cmdlets that allow to perform different actions with AD database in online or offline mode (directly with ntds.dit). In particular, we are interested in Test-PasswordQuality cmdlet that allows to detect users having weak, similar, standard, blank passwords (Password Not Required), or whose passwords never expire.

Note. Naturally, user passwords cannot be obtained from the AD database as plain text. Passwords stored in Active Directory are hashed. However, you can compare the password hashes of AD users with the hashes of words from a dictionary file and find weak passwords.

In PowerShell version 5 (and newer), you can install the DSInternals module online from the official PowerShell script gallery as follows:

In earlier PowerShell versions or in disconnected environment, you have to download the .zip archive with the latest module version from GitHub (https://github.com/MichaelGrafnetter/DSInternals/releases). By the time this article had been written, the latest release was DSInternals v4.4.1. Extract this archive into one of the directories containing PowerShell modules:

Or import the DSInternals module into your current PowerShell session using this command:

If the error “cannot be loaded because running scripts is disabled on this system” appears when importing a module, you need to change the current PowerShell execution policy and allow external PS scripts to run at least in the current session:

The list of available module cmdlets can be obtained as follows: 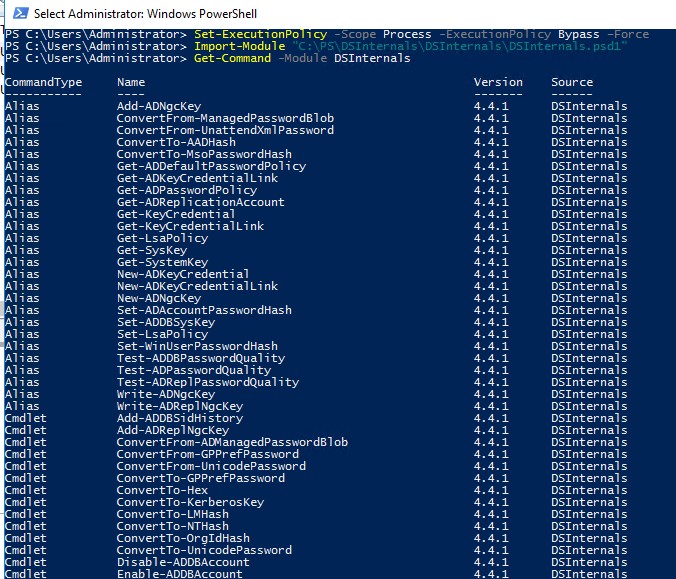 Next, you need to create a password dictionary. It will be a simple text file with a list of commonly used, weak, and other bad passwords. You can download a password dictionary file from the Internet or create yourself. The DSInternal module allows you to compare the hashes of your users’ passwords in Active Directory with the hashes of words from this file. Save the passwords to a text file PasswordDict.txt. 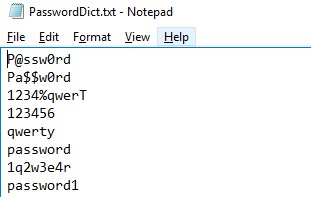 Now create a small PowerShell script. In the following variables, specify the path to the password file, the domain name and the domain controller name:

Then using the Get-ADReplAccount cmdlet, get a list of users in AD (like Get-ADUser). Additionally, this cmdlet returns their NT and LM hashes, as well as the hash history. Then, for each user, compare the hash of the password with the hashes from the dictionary file (the check is also performed for disabled user accounts):

The result of running the script may look like that: 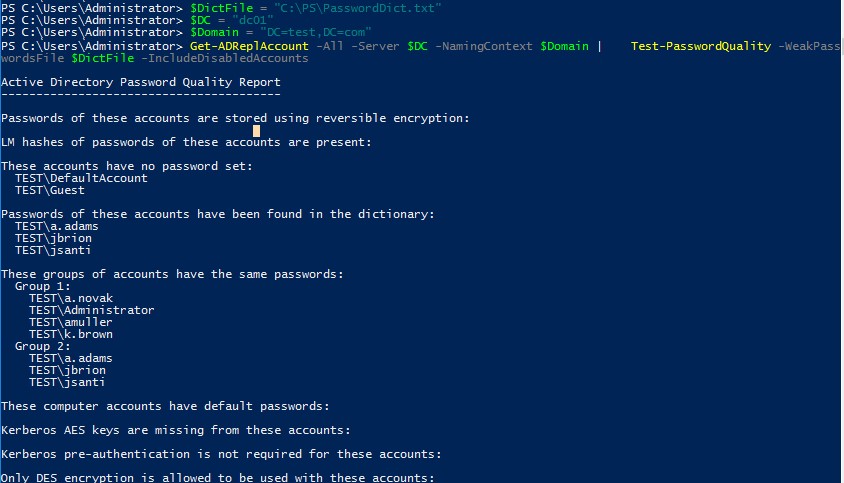 In previous versions of the DSInternal module, the ShowPlainText parameter was available to display the user’s password in clear text if its hash was found in the dictionary. It is missing in the current release of Test-PasswordQuality. If you want to use an older version of the DSInternals module, install it with the command:

For users with weak passwords, you can generate strong random password and force change them in AD through PowerShell.

You can also perform an offline scan of the Active Directory database file (ntds.dit). You can get a copy of the ntds.dit file from a shadow copy or from a domain controller backup.

To offline check user hashes in the ntds.dit file, use the following commands:

You can also export the list of all hashes to a text file:

There are no built-in tools to set the list of bad password for Active Directory Domain Services. However, with Azure AD password protection, you can block certain passwords (blacklist) even in your on-premises Active Directory.

So, using this scenario you can easily analyze the quality of AD user passwords, their resistance against brute force attacks, conclusions the current domain password policy complexity and make the necessary conclusions. Active Directory administrators can (and should) perform this audit regularly.

Copy AD Group Membership to Another User in PowerShell

Thanks for the detailed instructions and I wish it was possible to use this module with bigger password files as stream and for the output file too.

For the section of the report “These groups of accounts have the same passwords:”
Is this for CURRENT passwords or historical?