Several times in Windows 10 I noticed a strange bug when extra languages ​​appear in the list of keyboard layouts of the language bar. For example, I had 2 languages ​​installed on my laptop: German and English. But after installing Windows 10 update, two additional languages appeared in the list of languages – English (United Kingdom) and English (Canada), although I’m sure that I didn’t add them. And Windows doesn’t allow you to delete extra input languages (the Remove button is grayed out). Now I have to switch between 4 keyboard layouts instead of 2, which is very inconvenient! 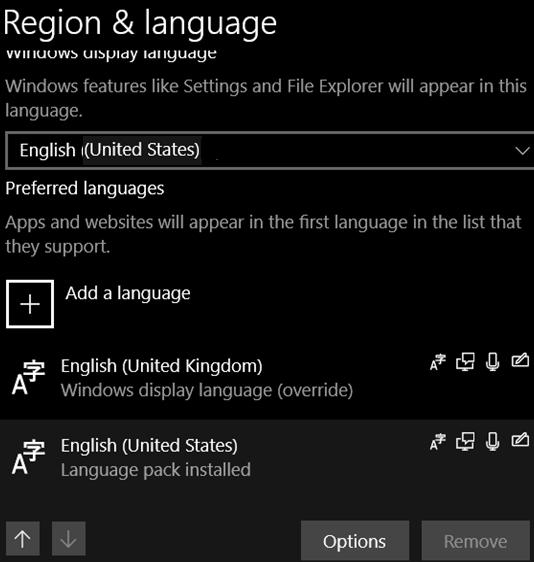 Let’s take a look at how to remove unwanted keyboard layouts in Windows 10 and Windows 11.

In Windows 10, you can usually remove any keyboard layout language that is not used as the default language. However, you may encounter a bug where some languages cannot be removed.

The bug with the non-removable keyboard layout first appeared after upgrading to Windows 10 1803 (there were many other bugs in that build, such as the extra recovery partition that appeared after the upgrade). The bug occurs if you add an extra language that uses the same base language as the current Windows display language. Such an additional language cannot be removed.

For example, if English (United States) is the current Windows interface language, then after adding English (United Kingdom) you can’t remove both languages from the list of preferred languages. And, of course, it is very inconvenient that an unnecessary keyboard language has appeared in the language pane in the system tray.

You cannot remove the additional languages in Windows using the lpksetup command, because these language packs are not installed:

You can remove the unnecessary extra input language in Windows 10 and 11 using PowerShell:

If you need to leave several keyboard layouts in Windows, you can remove only the extra languages you don’t need. For example, you want to remove languages with the following LanguageTag values: en-Gb and zh-Hans-CN.

To delete the Chinese keyboard language, replace the second line with:

Or you can specify the list of languages to keep in Windows:

Close the PowerShell console and make sure that all extra input languages are removed correctly.

How to Remove Extra Language Keyboard Layout in Windows Registry?

If additional languages have been removed from the input languages list, but still appear in the keyboard layouts, you need to manually remove them from the registry.

After that, the extra keyboard layout will disappear from the list of input languages.

If you are sure you don’t need a certain keyboard layout, you can disable it completely. The complete list of keyboard layouts is stored in the HKEY_LOCAL_MACHINE\SYSTEM\CurrentControlSet\Control\Keyboard Layouts registry key.

For example, you want to disable the following keyboard layout: 00000404 (Chinese (Traditional) - US Keyboard).

How to Change or Disable Session Timeout in VMware vSphere (ESXi) Client?

How to Delete or Rename Default Mailbox Database in Exchange Server?

Thank you! This indeed solved my problems. I’ve had 3 different English languages installed with no option to remove any.

Ohh man, thanks!!!
This was absolutely helpful.

I eventually find out where the additional languages were coming from.
When installing Windows 10 and adding your own user custom languages, the ones Microsoft predefined to be used for the Welcome screen and new user accounts keep being displayed after a reboot (I would even say after a reboot and opening of the “Region & language” configuration window).
All you have to do is to configure the new user accounts with the same languages as your.
To do so, go to Windows Settings >> Time & Language >> Region & language,
then in the right panel, open “Administrative language settings”,
on the Administrative tab, click on “Copy settings…”,
at the bottom of the window, select both check boxes,
and validate clicking “OK”.
Reboot and your problem is probably fixed!

For a guest-user I had to add on Russian temporarely. Afterwards I deleted Russian, succesfully cause f.i. it is not shown anymore in the WinUserLanguageList . Only Dutch and Englisch are left over, like I want it. But still ….. in my Windows (menu, explorer, error- and status-messages) Russian keeps on appearing.
(Which is trouble, ’cause I cannot read Russian or even type it translate ….. ) ….