Today we’ll describe how to recover data from a damaged or inaccessible hard drive encrypted using BitLocker. We will show you a simple case and a case with a damaged BitLocker drive. Such an issue may occur due to the file system corruption on an encrypted disk (for example, a damage to the hard disk area in which BitLocker stores important information caused by an unexpected system shutdown), the inability to boot the OS or the BitLocker recovery console, and similar failures that prevent normal opening of the encrypted data. The described problems can arise both with a system disk, and with a removable external or USB disk.

We will use the utility Repair-bde.exe (BitLocker Repair Tool) for data recovery, a command line tool appeared in Windows 7 / Server 2008 R2. It is used to access and recover the encrypted data on a damaged drive encrypted with BitLocker.

Requirements for data recovery from a BitLocker volume

In order to recover data from a BitLocker-encrypted drive, you must have at least one of the following BitLocker security elements:

The BitLocker Recovery Key is a unique sequence of 48 characters. The recovery key is generated when creating the BitLocker volume, it can be printed (and stored in a safe place), saved to a text file on a local drive (this is not recommended, because if this disk is will be damaged, you won’t be able to decrypt your data) or on external drive, or saved to your online Microsoft account. 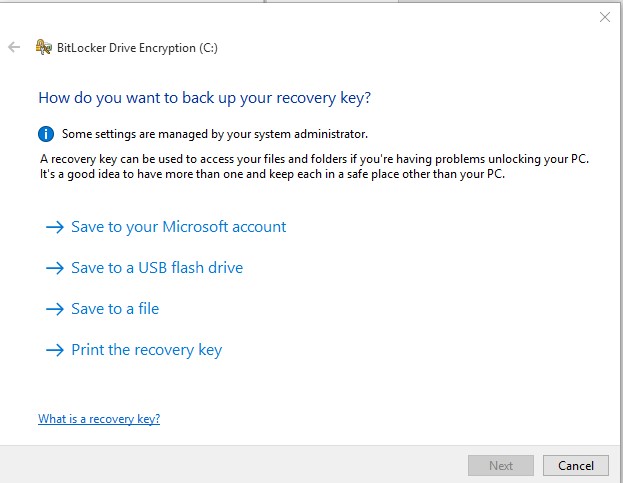 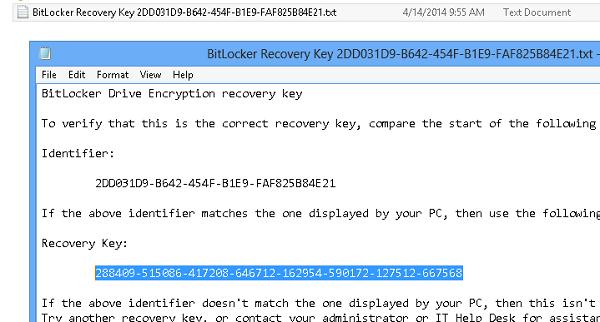 If you don’t have access to the BitLocker recovery key, then you won’t be able to access your encrypted data. Because BitLocker is designed to protect your files from other users.

A few nuances regarding the recovery of data from a BitLocker drive. Data needs to be restored to a separate disk with at least the same size as the encrypted one. During the recovery all the contents of this disk will be deleted and replaced with the decrypted data from the BitLocker volume. In our example, the disk F: (2 GB in size) is a USB stick with the contents encrypted using BitLocker, which won’t open for some reason. To recover the data, we mounted an additional external hard disk Data (G:) with the size of 10 GB.

How to unlock a BitLocker encrypted drive in Windows?

The simplest situation is when you need to unlock an BitLocker encrypted drive from Windows. You probably have an external drive or USB flash drive protected with BitLocker that won’t open, or you want to open an encrypted drive on another computer.

Connect the drive to your computer and go to the Control Panel -> System and Security -> BitLocker Drive Encryption (available in Professional and higher Windows editions). In the list of disks, select the BitLocker encrypted disk and click Unlock Drive. 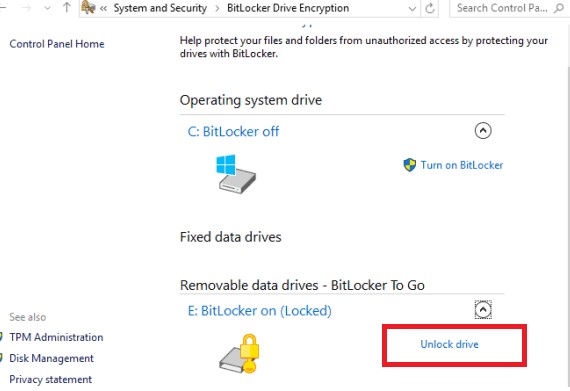 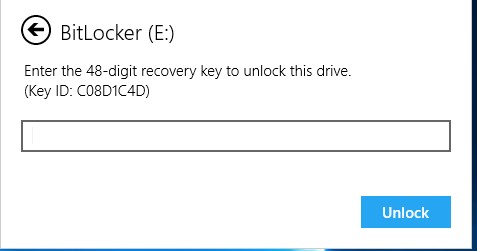 If you have multiple recovery keys, you can determine the recovery key you need using the identifier that is displayed in the window. If you specify the correct key, the disk is unlocked and you can access the data on it.

How to unlock a BitLocker drive where Windows is installed?

Consider a case when your system drive (where Windows is installed) is encrypted using BitLocker and for some reason your Windows doesn’t boot correctly (blue screen of death, hangs on boot, incorrect updates, etc.).

Try to run the Windows Recovery Environment (it will automatically start if Windows fails to boot 3 times in a row). If WinRE is not working, you can boot from the Windows 10 installation disk, the MsDaRT 10 recovery image, or another bootable disk. To run the command prompt, select Troubleshoot -> Advanced options -> Command Prompt, or press Shift + F10.

Check the status of all the disks on the computer using the command line (this is how you identify the Bitlocker encrypted drive):

The result of the command for one (or several) of the disks should contain the following text: “BitLocker Drive Encryption: Volume D”. So you have disk D encrypted.
Unlock it by running the command:

The command will ask you to enter your BitLocker password:

If the password is correct, a message will appear:

Your disk is decrypted and you can proceed to restore the OS.
If you want to completely disable the BitLocker drive protection, run:

Restart the computer. Now the Windows boot drive is not encrypted.

To decrypt data on a damaged volume encrypted with Bitlocker, you will need a recovery key or system boot key (if the system partition is encrypted).

If BitLocker is used to encrypt the Windows system partition and a special boot key on the USB flash drive is used to boot the system, you can decrypt the volume this way:

After the data recovery and decryption are over, you have to check the disk to which the volume contents has been extracted prior to opening it. To do it, run the following command and wait untill the process is complete:

Note. If the methods described above didn’t help to recover the data from the encrypted disk, it is worth trying to create a sector-by-sector copy of the damaged disk using a Linux tool DDRescue (or any other similar tool to recover data from damaged partitions). When you are done, try to recover data from this copy according one of the previously mentioned ways.

How to access a BitLocker encrypted drive in Linux?

You can open a BitLocker encrypted disk in Linux. To do this, you need the DisLocker utility and the BitLocker recovery key.

Some distributions (for example, Ubuntu) already have a dislocker utility. If the utility is not installed, download and compile it manually:
tar -xvjf dislocker.tar.gz
The INSTALL.TXT file indicates that you need to install the libfuse-dev package:
sudo apt-get install libfuse-dev
Now compile the package:
cd src/make make install
Go to the mnt directory and create two directories (for the encrypted and decrypted partition):
cd /mnt

In this example, we use the DisLocker utility in FUSE mode (Filesystem in Userspace), which allows users to create their own file systems without privileges. In FUSE mode, only the block that the system accesses (“on the fly”) is decrypted. At the same time, data access time increases, but this mode is much safer.
Mount the partition:
mount -o loop Driveq/dislocker-file /mnt/Decr-part
You should now see all the files on the encrypted partition.

can u tell me i forget my bit-lock password and i dont have also recovery key. i just have recovery key id i get it from command prompt. tell me how can i unlock my external hard drive or recover my data in decrypt?

I deleted my bit locker drive and installed windows on it!! Since I noticed recovered files and now I have a lot of unknown files (I guess because their encrypted).
Is there any way to decrypt this files instead of drive?

To the poster, thanks so much, this is the only thing that worked for me.

hi michael can u tell me i forget my bit-lock password and i dont have also recovery key. i just have recovery key id i get it from command prompt. tell me how can i unlock my external hard drive or recover my data in decrypt?

Is there anyway to de-encrypt the drive without needing another hard drive of the same capacity to extract to?

chris i forget my password and unfortunately i did not save key in my any document. can u tell me how can i recover this??

Bit of background…. I lent someone my drive and later on when I connected it to my computer there was no folders on it other than a .txt file names “Bitlocker recovery key ####- etc. On opening that file there is information on an identifier and a Bitlocker recovery key.
Checking the volume confirms that there is terrabytes of information on the drive but only this one text file

When i run the Bitlocker status command the information returned states that the drive is not locked?

When I run the other commands it asks for a target drive with enough space for the transfer but I don’t have a drive handy but i fear this attempt will also fail because it isn’t “Encrypted” – but is?

This method doesn’t work for me because my drive only shows up for like 30 seconds, and then disappears. When I enter the repair-bde command and use the password, it says “D:\ is not a valid volume” or something similar like that.

I had a corrupted boot disk on a MS Surface. These instructions were the only method I found that enabled me to decrypt the drive and recover the files. Huge save. Thank you.

Windows 10 Update (coincidentally?) broke my system and forced me into a permanent autorepair loop. Breaking out to the command prompt allowed me to un-bitlock my C: drive and chkdsk/f it which then allowed me to restart OK. THANK YOU!! The only issue was that I didn’t know my 48 digit (8 x 6) code was a recovery key not a password so I needed the -rp option instead of -pw . From that point it was plain sailing. THANK YOU.

Not only did this guide not help me, but it wiped the master boot record off my other Bitlocker drive and I had to completely format it and reencrypt it. Horrible guide.

Thanks a lot. your detailed explanation helped me to recover my system.
in fact my problem was I tried Bitlocker functionality on my work laptop and I know the password very well. but when I setup Bitlocker, I did on OS partition and kept the recovery key on my data partition.
I used windows 10 installation bootable USB as you suggest, and running reached to my data partition and extracted my recovery key, then restarted my PC with that…And now I am back to work on my PC.