You can use the SFC (System File Checker) and DISM (Deployment Image Servicing and Management) commands to check and repair the integrity of system files and Component Store of your Windows (Windows Server) image. These tools can be extremely useful if your Windows is unstable, won’t boot, errors appear when you try to run built-in apps or services, after a virus infection, etc.

In this article, we’ll take a look at how to use the SFC /ScanNow, DISM /Online /Cleanup-Image /RestoreHealth, or Repair-WindowsImage -Online -RestoreHealth commands to repair image and system files on Windows 10/11 and Windows Server 2022/2019/2016.

It is recommended to use the DISM command to restore Windows after you have checked the integrity of your system files using the SFC tool. The sfc /scannow command scans protected system files and if they are missing or corrupted it tries to restore their original copies versions the Windows Component Store (C:\Windows\WinSxS folder).

The SFC tools writes all its activities to the %windir%\logs\cbs\cbs.log . All SFC entries in the CBS.log file are tagged with [SR]. To select only SFC-related entries from the log, run the command:

If sfc /scannow command returns the error “Windows Resource Protection found corrupt files but was unable to fix some of them“, it is likely that the tool could not get the necessary files from the Windows Component Store (see the image below).

In this case, you can try to repair the Component Store of your Windows image using the DISM.exe command.

The DISM (Deployment Image Servicing and Management) tool is available in all versions of Windows starting from Vista.

After repairing the Windows image, you can try using SFC to restore your system files.

The DISM /Cleanup-Image /CheckHealth switch is used to scan the Windows image for errors and fix them. DISM commands must be run from the elevated command prompt.

Run the following command to check if there are any flags of corruption of the Windows image Component Store (not applicable for Windows 7/Server 2008R2). This command checks the CBS flag set by one of the system maintenance processes.

This command doesn’t perform a full scan of the Component Store. The command only checks if your Windows image is flagged as corrupted and if it is possible to fix it. No changes are made to the image.

In this example, the command has returned that the Windows 10 image has no corruptions:

To run a full scan of the Windows Component Store health, run the command:

The command to check the Windows image can take quite a long time (10-30 minutes). And will return one of three results:

In order to use DISM /ScanHealth switch on Windowds 7 and Windows Server 2008, you have to install the KB2966583 update. Otherwise, you will see the message: “Error 87. The ScanHealth option is not recognized in this context”.

In some cases, the DISM /ScanHealth returns the following errors:

It definitely means that your Windows image is corrupted and needs to be repaired.

To fix corruption in the Windows image Component Store, you must use the RestoreHealth option of the DISM command. This option will allow you to fix errors found in the Windows image, automatically download and replace files of damaged or missing components with original versions of files from Windows Update (your computer must have direct Internet access). Run the command:

The process of scanning and repairing the Component Store may take quite a long time (30 minutes or more). DISM will automatically download and replace the files of corrupted or missing components with original file versions from Windows Update servers.

If the repair has been successful, the following message will appear:

DISM /RestoreHealth:  The Source Files Could Not Be Found

If your computer (server) has no direct Internet access (located behind a proxy, or have used internal WSUS to get security and build updates) or Windows Update service is disabled/damaged (how to repair Windows Update client), then the following errors appear when repairing the Component Store:

In all of these cases, you can use alternative ways to get the source Component Store files. It can be:

You can specify a WIM or an ESD file with the original Windows installation image to be used as a source to repair the system files. Suppose, you have mounted an installation Windows 11 ISO to the virtual drive D:.

Note. To repair the corrupted files in the Component Store from the local source, the Windows build and edition in the WIM/ESD image must match those of your system.

Check which version of Windows is installed on your computer using the following PowerShell command:

List the available Windows editions in the installation wim image:

In our case, the Windows 11 Pro image in the install.wim file has ImageIndex = 6. 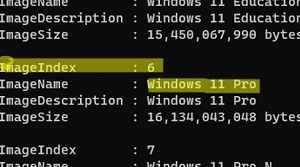 To repair the Component Store from a local WIM/ESD file using the local source files (without using Windows Update online services), run the following command (remember to specify the Windows version index in the image file):

The following errors can appear when running the DISM /RestoreHealth command:

You can find the DISM log of scanning and repair of the system files here: C:\Windows\Logs\CBS.log.

After the component store has been repaired, you can run the system file checker tool (sfc /scannow). It is likely that it will be able to restore the damaged or missing system files (Windows Resource Protection found corrupt files and successfully repaired them).

If the SFC.exe doesn’t detect any damage to the system files, a message will appear

The version of PowerShell in Windows 10/11 and Windows Server 2016/2019/2022 has a cmdlet similar to the DISM commands discussed above. To scan the Windows component store and find any corruptions, run this command:

If no errors are found in the Component Store, the following message appears:

If you don’t have direct Internet access, this command may hang during the image repairing process. You can restore the system components from the local Windows image file (install.wim/install.esd) copied from the Windows 10 installation ISO image. Here you also need to specify the Windows version index in the wim file as the recovery source:

If Windows doesn’t boot correctly, you can use DISM to check and repair system files of your Windows image offline.

Troubleshooting: Group Policy (GPO) Not Being Applied to Clients

Wow thank a lot. Can it solve the “missing Winre” to create a recovery drive?

Good article. Thank you so much!

I need to do an offline DISM repair of my Windows 10 but the boot usb disk created does not have an install.wim file. Instead, it has install.esd file. As mentioned in the online DISM repair I used it in the /Source parameter (/Source:D:\sources\install.esd) . But during the DISM repair I get error saying source not found. The log file has many entries mentioning failure… the first failure log says –
DISM DISM Provider Store: PID=1396 TID=1740 Failed to get and initialize the PE Provider. Continuing by assuming that it is not a WinPE image. – CDISMProviderStore::Final_OnConnect
Further the log file also has these entries :
CBS Session: 376_1129843 initialized by client DISM Package Manager Provider, external staging directory: (null), external registry directory: (null)
CBS Exec: Addsource called, Session: 376_1129843, Client: DISM Package Manager Provider, from GPO: No, Path: E:\Sources\install.esd
CBS The alternate source path directory could not be accessed [HRESULT = 0x8007007b – ERROR_INVALID_NAME]

Can you please help me understanding why it could be failing? And how to resolve it?
Appreciate your help