Error 0x0000007e when connecting a network printer occurs quite often both in Windows 10 and Windows 7. In most cases this error occurs in configurations when the printer is directly connected to another Windows computer (print server) and shared for printing from other computers over the network.

In my case, the error appeared in the following configuration. There is a print server on the 32-bit version of Windows Server 2008 x86 with several shared HP (Hewlett-Packard) printers. If you try to connect any printer from this server to a computer with 64-bit clients (Windows 10 or Windows 7), the operating system successfully downloads the correct version of the HP printer driver from the print server, but fails to install it with the error 0x0000007e.

The specified module could not be found. 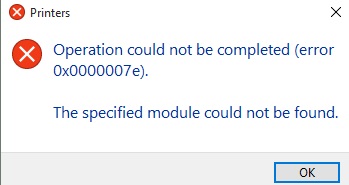 However, there are no problems with connecting and installing shared network printers from the same print server from 32-bit Windows editions.

Error 0x0000007e appears only on 64-bit clients when trying to connect to a shared Hewlett Packard printer installed on a 32-bit print server (running on Windows Server 2003 x86 or Windows Server 2008 x86). Typically, the problem appears not with all HP printers, but only with those which are using the universal printer driver HP PCL (HP Universal Print driver).

What do you need to do to fix the error? First of all, you have to check that both a 32- and a 64-bit driver versions are installed on the print server. As you can see, x64 and x86 versions of HP Universal Printing PCL 6 driver are installed.

Having looked through HP and Technet forums, I found information that in the Universal HP Printing driver settings specified a fixed path to a spooler file (print queue) for a 32-bit system (spool\drivers\w32x86\3), which the 64-bit client unable to find, so error 0x0000007e appears. The file path is specified in the printer driver settings on the print server. In my case, it has been spool\DRIVERS\W32X86\3\hpcpn112.dll, but a dll file name depends on the Universal HP Printing driver version. Thus, the 32-bit version of the HP Universal Printing printer driver is incompatible with x64 versions of Windows. However, this can be fixed manually.

To fix this problem, you need to delete the corrupted (incorrect) registry key of the HP print driver on a print server (computer) to which the shared printer is directly connected. To solve this problem on a 32-bit print server:

If this method doesn’t work, or if you receive a 0x0000007e error when connecting non-HP printers, you can try to connect the printer through the local port as a workaround. Here’s how to do it:

There is another similar method of connecting such a network printer with the help of LPT port mapping.

Brilliant!  How rare that someone actually understands the root problem and can tell us exactly how to fix it.  Thanks!

Thank you so much.  This was a tremendous help and solved my problem.

Thanks a lot! This was giving me trouble for days. It made no sense, so glad you brough back some logic.

Thank you, helped me out big time.