Using local accounts (including the local administrator account) to access another computer over network in Active Directory environments is not recommended on a number of reasons. The same local administrator login and password are often used on many computers resulting in putting many computers at risk if one computer is compromised (Pass-the-hash threat). Moreover, access to the network with local accounts is hard to personify and centrally monitor, since it is not registered on AD domain controllers.

In Windows 8.1 and Windows Server 2012 R2, two new security groups (Well-known group) with new SIDs appeared. It means that now you don’t need to list all possible SIDs of local accounts, but use the universal SID instead. 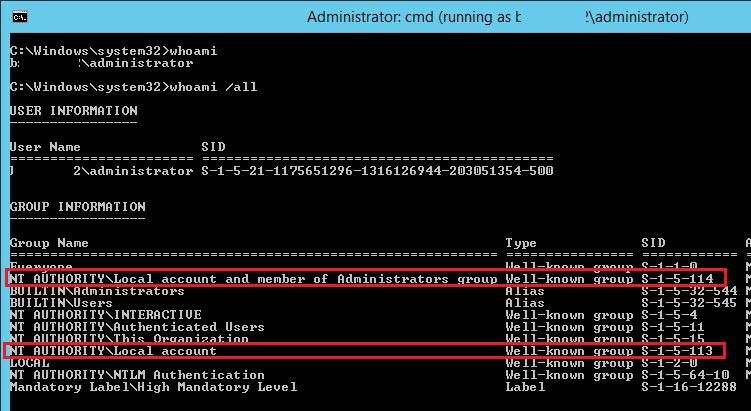 You can check if these groups are present in the system as follows:

To restrict the network access for these local accounts containing these SIDs in the token, you can use the following policies to be found in Computer Configuration -> Windows Settings -> Security Settings -> Local Policies -> User Rights Assignment.

After the policy is applied, the network access with local accounts is denied to this computer. When trying to establish an RDP session with  .\administrator account, the following error appears.

The system administrator has restricted the types of logon (network or interactive) that you may use. For assistance, contact your system administrator or technical support.
Important. It is worth to note that if the policy is applied to the computer beyond the Active Directory domain, you can access this computer only using the local console.

Thus, you can deny network access with local accounts irrespective of their names and increase the security level of the corporate environment.

How to Enable and Configure MPIO on Windows...

How to View and Close Open Files in...

How to Allow Non-Admin Users to Start/Stop Windows...

How to Downgrade Windows Server Datacenter to Standard...

Thanks for the good article

Great article.
And how to allow .\administrator on a specific computer only?

You can exclude a user or group from Group Policy Object. To do this, find you GPO you want to apply an exception on in the Group Policy Management Console. Go to the Delegation tab -> Advanced -> Add -> Select a computer name to exclude -> Select “Deny” in the “Apply group policy” permission.