When you replace computer or server hardware (motherboard, drive controller, etc.), restore a system image from a backup or migrate a physical host into the virtualization environment (P2V), the BSOD with error 0x0000007B can appear at the first time you boot Windows Server 2008 R2 or Windows 7.

This stop code corresponds to the INACCESSABLE_BOOT_DEVICE error and is related to the difference of the hard disk controller of a new server (a computer or a virtual machine) from the original equipment. When booting, the driver necessary to boot from the new controller is not loaded. Windows cannot be started due to it.

An administrator may encounter the error 0x0000007B in the following cases:

In my case, the problem appeared when migrating a physical server running Windows Server 2008 R2 into VMWare environment. The blue screen appeared at the first startup of the VM.

In the debug mode you can see that Windows boot stops at the stage of loading the CLASSPNP.SYS driver.

To fix the error 0x0000007B, you need to boot from any Windows installation media (with Windows 7 / 2008 R2 or higher) or a boot disk (for example, DART). If you use the Windows installation disk, press Shift+F10 on the first installation screen (then you selecting a language and keyboard layout). The command prompt window appears, where you must execute the command:

In the Registry Editor window, go to the registry hive HKEY_LOCAL_MACHINE and select File -> Load Hive. On the local server drive (don’t confuse it with the WinPE disk), select the file \Windows\System32\config\SYSTEM. This file stores the system part of the registry your local Windows copy.

Thus, you will mount (for example, under the name local_hkey) the registry hive of your system from the hard drive to the registry editor. 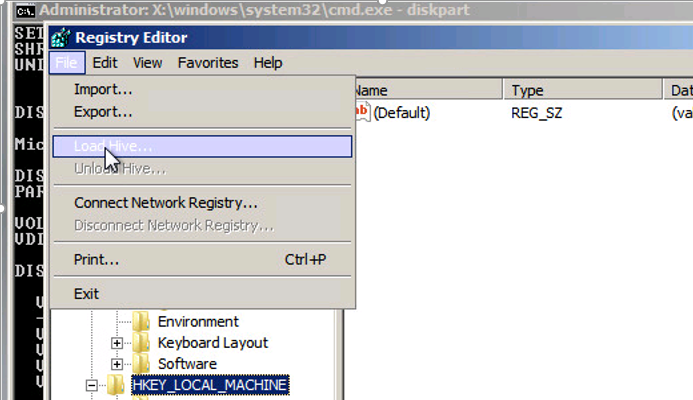 In the loaded hive, go to registry key HKEY_LOCAL_MACHINE\local_hkey\ControlSet001\services\.

Find REG_DWORD parameters with the name Start in each of these keys and change their values to 0 (0x00000000).

If you had switched your SATA controller mode to AHCI before this error appeared, you should also set Start = 0 in the msahci section. 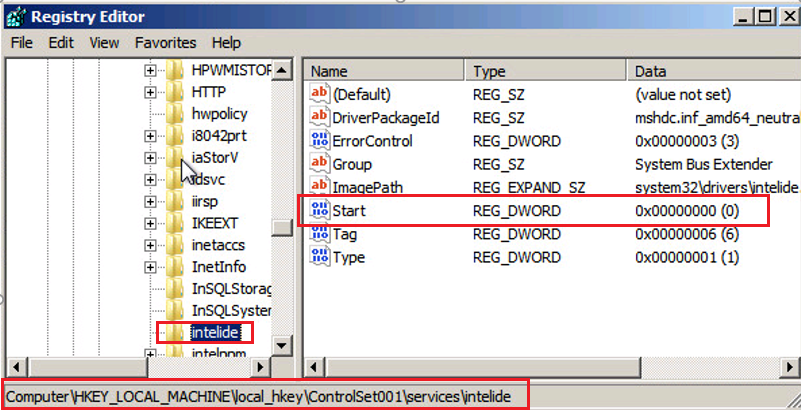 To save the changes in the local registry file on the disk, go to the registry key HKEY_LOCAL_MACHINE\local_hkey and select Unload Hive in the menu. 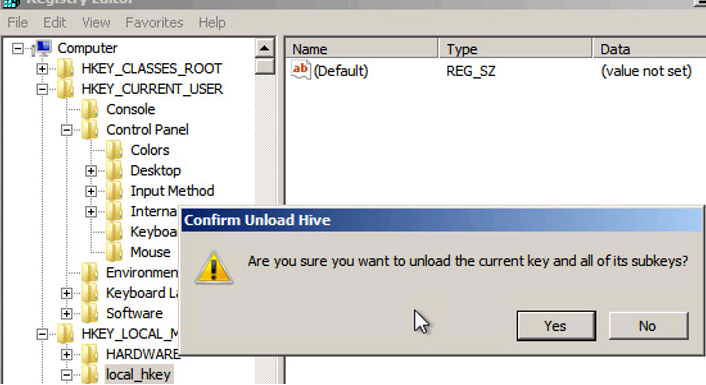 Now you can restart your server. Windows should boot normally. It will search and install drivers for your new drive controller.

In case of VMWare, you will just have to install VMWare Tools.

If after these changes your Windows still returns the same error INACCESSABLE_BOOT_DEVICE when booting, it means you are using some other type of the disk controller. Try to change the value of the Start parameter in HKEY_LOCAL_MACHINE\local_hkey\ControlSet001\services according to the table below.

Thanks for the guide, it’s very helpful.

The best solution I found… Thank you.

God bless you…really.
It worked like a charm for me.
Thanks again
Andrea

Thanks man, Very cool solution.
It was worked for me too. You are a lifesaver.

Migrating a VM from Xenserver to Vmware, significant hardware change.

Thank you so much for this worked perfectly for a P2V disaster recovery emergency.

You are awesome, I can’t thank you enough, 7 sleepless nights ended by your awesome post.

Many Thanks. Really solve my problem.

Rarely do I comment on these posts, this one saved me on a server that has been taken P2V (Xenserver), V2V (Xen to HyperV), and now V2V (crashing HyperV to VMware)…I think the LSI_SAS setting was there from XENSERVER. Thanks!

Hi. I get this exact error, but these steps don’t work for me. Using a WSB and restoring from an HP DL380 to a Hyper V environment. Your table at the bottom doesn’t list Hyper V, only VMWare – would the setting sbe the same? I have tried them and still the BSOD. Any thoughts? Many thanks.

Wow can’t believe this worked! Thanks so much!!

Wow…Thank you so much. I am very grateful. Thank you once again! Excellent article, superb website.

Thank you so much, that table saved my life! I attached a Xenserver VM disk to VMware, putting LSI_SAS to 0 fixed my BSOD.

Wow! Wonderful! Works like a charm for Hyper-V as well.
Congrats!!!

Hi Guido. I still couldn’t get it to work, so I gave up and restored it to physical, then backed up with Veeam, then restored to virtual ….long-winded, but it got me where I needed!

I really thought that this would be a hard one, but the solution was rather easy 🙂
Thank you very much!

Didn’t boot with a CD, just mounted vhdx file and they followed the regedit instructions. Outstanding! Worked like a charm!

Thanks !! It really saved me 😉

Thank you so much! Really good article, helped me a lot.

Dude….DUUUUUUDE! You just saved my skin…was trying to P2V two aging Windows Server 2008 installations and one of the two failed to boot.
You regedit-fix did the trick, THANK YOU!

I would like to kiss your belly button!
Thanks a lot!

Are you married? No? Wanna be?!
Thank you very much! Rsrsrs

Thank you! After several tries (hours of tries), thinking that there was a issue with the boot configuration, that solution worked!!

Thank you for above writing: they solved my issue 🙂

This is the secret sauce for a CloneZilla image to Windows 7 Pro VM on VMWare Workstation.

I’m almost give up of migrating xenserver windows server 2008 (AD) to vmware esxi 6.5 … I’ve done a script to change registry in order to remove xen keys and worked for all other windows server … but not for windows 2008 server …

Before backup and recover a Bare Metal of windows 2008 into VMware ESXi … I’ve copied this script to Desktop of
Windows server 2008 as remove.xen.keys.bat:

After booting media to recover windows, go to cmd prompt and execute remove.xen.keys.bat:

Your script fixed my issue, but manually following the table didn’t. Not sure what the issue was. But thanks!!

Am I the only one that this didn’t work for? 😭😭

You are a angel sent from heaven. Thank you so much for creating this article. Saved me so much time.

Thank you very much. I solved P2V boot problem with these steps.

Thank you very much!
Solved a Windows 7 P2V VMWare Standalone Converter boot problem with these steps.

Thak you so much!

Thank you so much for this! I have spent hours and hours trying to sort this out. While I found

I was able to resolve the issue Doug was facing with a Proliant server. In short there are additional services which must be started not listed in this post. I followed Stanislaw’s recommendation and enabled all services with the group “SCSI Mini…” by converting “Start” value from 3 to 0. This was still not enough. However when I enabled all services in the group “SYSTEM BUS EXTENDER” as well I was finally able to boot the VM. Hope this helps others.

In short if you enable every single service it should work.

Thanks!!! It’s works perfect after the registry changes. You are the best!!!

After swapping PERC 6i to a H700 on a Dell R610 server, followed your instructions. Everything went well. Thankyou.
As this swap was planned, and after your Fix, I began to wonder if:
1) With the PERC 6i still installed – carry out the Registry changes you describe.
2) Shutdown server and swap out the PERC to the H700
3) reboot, and all is good
For those planning a swap – would this work, as it is much simpler. ???

Hey Guys, I’m having an issue with our last 2003SP2 32bit server im trying to virtualize.
This is currently sitting on an HP G4 server with Smart array 6400
I’ve tried many tricks recommended by vmware injecting the symmpi.sys drives and importing the reg entries from a working 2003 vm
I verified that symmpi.sys start is set to =0 but im still getting the 0x7b bsod on the virtual
the original 2003 server is still up but VSS completely jacked and cannot run vmconverter standalone or disk2vhd
Any tips to getting this 2003 server to boot in vmware?

WHO ARE YOU?!?! You just saved my life

Your are a SUPERSTAR! Thanks a million. I went from dejected to happy because of your time and effort to make this article. Hat tip!

Excellent article, precise recommendations, superb results! It worked like a charm, and I have learned things (local_hkey) which I’ve never dreamed were possible! Thanks a lot!

It allowed me to boot and run a physical disk with Windows 2008 Server (32 bit) installed on it, on top of a Hyper-V VM in a Windows 2019 Server. Perfect. Thanks again!

After hours of search and try this worked out for me as well. thanks a lot!!