If you cannot open/map network shared folders on your NAS, Samba Linux server, computers with old Windows versions (Windows 7/XP/Server 2003) from Windows 10, most likely the problem is that legacy and insecure versions of the SMB protocol are disabled in the latest Windows 10 builds (SMB protocol is used in Windows to access shared network folders and files).

Starting with Windows 10 1709 and Windows Server 2019 (both in Datacenter and Standard editions), the unsafe SMBv1 protocol is disabled by default SMBv1  because of CVE-2017-0144 (remember the WannaCry ransomware attack, which was implemented through the SMBv1 vulnerability), as well as anonymous (guest) access to network shared folders.

The specific actions that you need to take depend on the error that appears in Windows 10 when you trying to access the shared folder, and on the settings of the remote SMB server that hosts the network shares.

Starting with the Windows 10 build 1709 Fall Creators Update (Enterprise and Education editions), users began to complain that when trying to open a network shared folder on a nearby computer, an error appeared:

Restoring Network Connections
An error occurs when you try to open a network folder:
An error occurred while reconnecting Y: to \\nas1\share

Microsoft Windows Network: You can’t access this shared folder because your organization’s security policies block unauthenticated guest access. These policies help protect your PC from unsafe or malicious devices on the network. 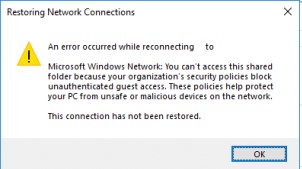 Moreover, on other computers with Windows 8.1, Win 7, or on Windows 10 with a build of up to 1709, the same shared network folders open normally. The point is that in modern versions of Windows 10 (starting from 1709 build), the guest access to the shared folders using the SMBv2 protocol is disabled by default. Guest (anonymous) means access to a shared network folder without authentication. When accessing a network folder under a guest account over the SMBv1/v2 protocol, such methods of traffic protection as SMB signing and encryption are not used, which makes your session vulnerable to the MiTM (man-in-the-middle) attacks

In Windows 10 Home and Pro 1709, these changes are not applied and the network access under the guest account is working fine.

If you try to access a network shared folder using the SMB v2 protocol under the guest account, the following error appears in the SMB client log (Microsoft-Windows-SMBClient):

In most cases you can face this problem when accessing old NAS  devices (usually guest access is enabled on them for ease of setup) or when opening network folders on Windows 7/2008 R2 / Windows XP/2003 with the anonymous (guest) access configured (see the table of supported SMB protocol versions in different Windows editions).

In this case, Microsoft recommends to change the settings on a remote computer or NAS device that host the network folders. It is advisable to switch the network shares to the SMBv3 mode. Or configure access with authentication if only the SMBv2 protocol is supported by the device. This is the most correct and safest way to fix the problem.

Depending on the device on which network folders are stored, you must disable guest access on them:

There is another way – you can change the settings on your Windows 10 computer to allow access to shared network folders under the guest account. This method should be used only as a temporary workaround (!!!), because access to folders without authentication significantly reduces the level of security of your computer and data.

To enable access under the guest account from your computer, you need to use the Group Policy Editor (gpedit.msc). Go to the section: Computer Configuration ->Administrative templates -> Network -> Lanman Workstation. Find and enable the policy Enable insecure guest logons. These policy settings determine whether the SMB client will allow unsafe guest logon to the SMB server.

In Windows 10 Home, which does not have a local GPO editor, you can make a similar change through the registry editor with the command:

Another possible problem when accessing a network folder from Windows 10 is server-side support of only the SMBv1 protocol. Since the SMBv1 client is disabled by default in Windows 10 1709 and newer, when you try to open the shared folder, you may get an error:

You can’t connect to the file share because it’s not secure. This share requires the obsolete SMB1 protocol, which is unsafe and could expose your system to attack. Your system requires SMB2 or higher.

In this case, neighboring computers may not be displayed on the local network, and when opening a shared folder through the UNC path, error 0x80070035 may appear.

The error message clearly shows that the network shared folder only supports access over the SMBv1 protocol. In this case, you should try to reconfigure the remote SMB device to use at least SMBv2 (the correct and safe way).

If you use Samba server on Linux to share network folders, you can specify the minimum supported version of SMB protocol in the smb.conf file like this:

On Windows 7/Windows Server 2008 R2, you can disable the SMB 1 protocol and enable SMBv2 with the following PowerShell commands:

On Windows 8.1/Windows Server 2012 R2, you can disable SMBv1, enable SMBv2 and SMBv3, with the following command (verify that a private or domain profile is used for your network connection):

If your network device (NAS, Windows XP, Windows Server 2003) supports only the SMB1 protocol, you can enable on Windows 10 a separate SMB1Protocol-Client feature. But this is not recommended!!!

Run the PowerShell prompt and verify that the SMB1Protocol-Client is disabled (State: Disabled):

Enable the SMBv1 client protocol (a reboot is required):

You can also enable/disable additional features of Windows 10 (including SMBv1 components) from the dialog optionalfeatures.exe -> SMB 1.0/CIFS File Sharing Support. 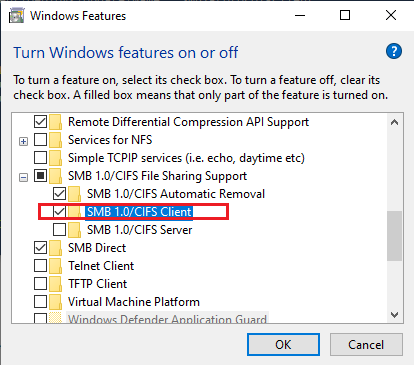 On Windows 10 1809 and newer, the SMBv1 client is automatically deleted if it has not been used for more than 15 days (the SMB 1.0/CIFS Automatic Removal feature is responsible for this).

In this example, I enabled only the SMBv1 client. Do not enable the SMB1Protocol-Server feature if your computer is not used by legacy clients as a shared folder SMB server.

After installing the SMBv1 client, you should be able to connect to a shared folder or printer without any problems. However, you should understand that using this workaround is not recommended, because this reduces the level of protection for your system.

Internal SSD/SATA Drive Shows as a Removable in Windows

Outlook Does Not Display Images in Email

I had such an error then accessing NAS share from Windows 10 1803:
“You can’t connect to the file share because it’s not secure. This share requires the obsolete SMB1 protocol, which is unsafe and could expose your system to attack.”
The problem was solved by installing the SMB v1 Client. Thank you!

Thank so much. It useful for me. 🙂

I had to ‘Enable insecure guest logons’ to acces my local qnap share.
Really useful information but now I am unsure on why it is insecure and what to do.
I will Google it 😉