The technology of Managed Service Accounts (MSA) was firstly introduced in Windows Server 2008 R2 to automatically manage (change) passwords of service accounts. Using Managed Service Accounts, you can considerably reduce the risk of system accounts running system services being compromised. (It’s no secret that there are a lot of utilities that allow to extract locally passwords of users from LSASS).

For MSA accounts, a password containing 240 characters is generated, half of which are English letters and another half is special characters. The password for this type of account is changed automatically (by default, every 30 days) and is not stored on the local system.

One of the main MSA drawbacks is the opportunity to use such service account only on one computer. It means that MSA service accounts cannot work with cluster or NLB services (web farms) which operate simultaneously on multiple servers and use the same account and password

To eliminate this drawback, Microsoft added the feature of Group Managed Service Accounts (gMSA) to Windows Server 2012. These accounts can be used simultaneously on several servers, so that all service instances used the same account, like in Load Balancer (NLB), cluster services, etc.

To use gMSA features, the infrastructure has to meet the following requirements:

How to Create a KDS Key

Before you start creating an account gMSA,  you must  to perform a one-time operation and create a KDS root key. To do it, run the following command with administrator privileges on the domain controller (Microsoft Key Distribution Services has to be installed and running):
Add-KdsRootKey –EffectiveImmediately
In this case the key is created and becomes available in 10 hours after the replication is over.

Tip. To use the key immediately in the test environment, you can run this command:
Add-KdsRootKey –EffectiveTime ((get-date).addhours(-10))

Make sure that the KDS root key has been created successfully:
Get-KdsRootKey

Create a new gMSA account with the following command:
New-ADServiceAccount -name gmsa1 -DNSHostName dc1.woshub.com -PrincipalsAllowedToRetrieveManagedPassword "gmsa1Group"
Where gmsa1 is the name of the gMSA account to be created

dc1.woshub.com is the DNS server name

gmsa1Group is an Active Directory group that includes all systems which are going to use this group account. (The group has to be created in advance.)

After the command has been executed, open the ADUC (Active Directory Users and Computers) console and make sure that the corresponding account has appeared in Managed Service Accounts container (OU). (By default, this container is hidden. To see it, enable Advanced Features in the View menu of the snap-in.)

How to Install gMSA on a Server

Enable Powershell module to support Active Directory environment:
Add-WindowsFeature RSAT-AD-PowerShell
Then you have to install the managed account on the servers, on which it will be used. (With this account, a service is going to be run.) First of all, make sure that this server is allowed to get a gMSA account password from Active Directory. To do it, its account has to be a member of the domain group specified when creating the account (in our case it is gmsa1Group). Install gmsa1 account on this server:
Install-ADServiceAccount -Identity gmsa1
You can make sure if the group service account is installed correctly using this command (for Windows PowerShell 4.0):
Test-ADServiceAccount gmsa1
If the command returns True, it is configured correctly.

Then in the service properties specify that the service will be run with gMSA account. To do it, check  This account in the Log on tab and type the name of the service account. At the end of the name use symbol $, the password need not to be specified. After the changes are saved, the service has to be restarted. 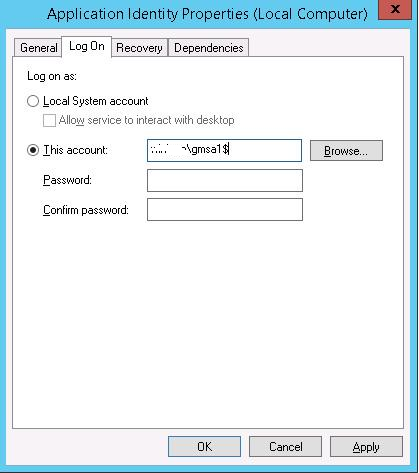 You can change the period of the password change (by default, it is 30 days):
Set-ADServiceAccount gmsa1-ManagedPasswordIntervalInDays 60
gMSA account can also be used in the Scheduler tasks. A fine nuance is that the task can be configured only in PowerShell:
$action = New-ScheduledTaskAction  “c:\scripts\backup.cmd”
$trigger = New-ScheduledTaskTrigger -At 22:00 -Daily
$principal = New-ScheduledTaskPrincipal -UserID woshub\gmsa1$ -LogonType Password Register-ScheduledTask BackupDB –Action $action –Trigger $trigger –Principal $principal
The argument “-LogonType Password” means that the password of this gMSA account will be obtained from the domain controller.

How to Filter Event Logs by Username in...

Your comment about changing the password interval is incorrect according to the Microsoft Documentation for the CMDlet (https://docs.microsoft.com/en-us/powershell/module/activedirectory/set-adserviceaccount). Running get-help for Set-ADServiceAccount also does not show this parameter in the syntax. The proper way would be to use the -Replace parameter and to specify @{‘msDS-ManagedPasswordInterval’=’60’}; however, you then get an error “The attribute cannot be modified because it is owned by the system”. This can be further verified under the technical specification for the attribute (https://msdn.microsoft.com/en-us/library/cc220154.aspx).

It seems the only way to achieve a different password interval is to recreate the service account. If you do this, you’ll need to make sure that you replace any references to this account as recreating it will break any prior usage of an account with a similar name.