Windows OS Hub / PowerShell / How to Measure Storage Performance and IOPS on Windows?

How to Measure Storage Performance and IOPS on Windows?

One of the main metric, which allows to estimate the performance of the existing or designed storage system is IOPS (Input/Output Operations Per Second). In simple terms, IOPS is the number of read/write operations with a storage, disk or a file system per a time unit. The larger is this number, the greater the performance of your storage (frankly speaking, the IOPS value has to be considered along with other storage performance characteristics, like latency, throughput, etc.).

In this article, we will look at several ways to measure the storage performance (IOPS, latency, throughput) in Windows (you can use this manual for a local hard drive, SSD, SMB network folder, CSV volume or LUN on SAN/iSCSI storage).

You can roughly estimate the current storage I/O workload in Windows using the built-in disk performance counters from Performance Monitor. To collect these counters data:

When analyzing the counter data, it is advisable for you to understand the current physical disks (storage) configuration (whether RAID or Stripe is used, the number and types of disks, cache size, etc.).

Microsoft recommends to use the DiskSpd (https://aka.ms/diskspd) utility for generating a load on a disk (storage) system and measuring its performance. This is a command line interface tool that can perform I/O operations with the specified drive target in several threads. I quite often use DiskSpd to measure the storage performance and get the maximum available read/write speed and IOPS from the specific server (of course you can measure the performance of storage as well, in this case diskspd will be used to generate the storage load).

The DiskSpd does not require installation, just download and extract the archive to a local disk. For x64 bit systems, use the version of diskspd.exe from the amd64fre directory.

I use the following command to test the performance of the disk:

Important. When using diskspd.exe, quite a considerable load is generated on the disks and CPU of the tested system. To eliminate the performance degradation for users, it is not recommended to start it on productive systems in peak hours.

After the stress test is completed, average storage performance values can be obtained from the output tables.

In my test, the following performance data (check the Total IO table) was obtained:

You can get individual values for read (section Read IO) or write (section Write IO) operations.

Having tested several disks or storage LUNs using diskspd, you can compare them or select an array with the desired performance for your tasks.

How to Measure Storage IOPS, Throughput and Latency Using PowerShell?

I have found a PowerShell script (by Mikael Nystrom, Microsoft MVP), which is essentially an add-on to SQLIO.exe utility (a set of file storage performance tests).

Note. In December, 2015, Microsoft announced the end of support for this tool and replacement of SQLIO with a more universal tool Diskspd, and removed SQLIO distribution files from its website. So you will have to search for sqlio.exe by yourself, or download it from our website (it is located in the archive with the PowerShell script).

So, download the archive containing 2 files: SQLIO.exe and DiskPerformance.ps1 (disk_perf_iops.ZIP — 74 KB) and extract it to any folder.

An example of running a PowerShell script to estimate disk performance and IOPS: 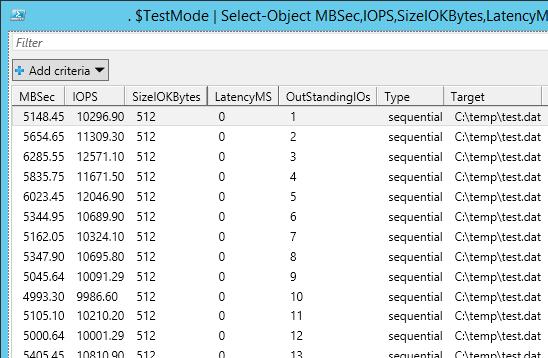 In our case (a vmdk virtual disk on the VMFS datastore on HP MSA 2040 connected over SAN is used) the disk array showed the average IOPS value of about 15,000 and the data transmission rate (throughput) about 5 Gbit/s.

In the following table, the approximate IOPS values for different disk types are shown:

I have found some recommendations for disk performance in IOPS for some popular Microsoft services:

System Logs on ESXi Host are Stored On Non-Persistent Storage

If the first column shows Megabits per second, it should be MbSec instead of MBSec. Now it’s Megabytes per second.

Hi, does the diskpsdtmp.dat needs to be created? I have tried the command, but there is nothing about this file
where to get it? does the exe created it? In my case, there are errors telling that the file don’t exist , and I created one, but it also says that the size is too small

The diskpsdtmp.dat file is created automatically by the diskspd tool. Verify that the specified directory path exists and that there is sufficient free space on the disk.