Since Windows XP there is a built-in ability in Microsoft Windows to set up network ports forwarding. Due to it, any incoming TCP connection (IPv4 or IPv6) to local port can be redirected to another local port or even to port on the remote computer. And it is not necessary for system to have a service that listens to this port.

In Linux, port redirection is configured quite simply using iptables. On Windows Server systems, the Routing and Remote Access Service (RRAS) is used to organize port forwarding. However, there is an easier way to configure the port forwarding, which works well in any version of Windows.

Let’s imagine that our task is to make the RDP service to respond on a non-standard port, for example 3340 (the port can be changed in the settings of the service, but we will use RDP to make it easier to demonstrate forwarding). To do this, you need to redirect incoming traffic from TCP port 3340 to another local port – 3389 (standard rdp port).

Start the command prompt as an administrator and perform the following command:

Using netstat make sure that port 3340 is listened now:

Note. If this command does not return anything and port forwarding via the netsh interface portproxy does not work, make sure that you have the iphlpsvc (IP Helper) service running on your system.

IPv6 support must be enabled on the network interface for which the port forwarding rule is created. 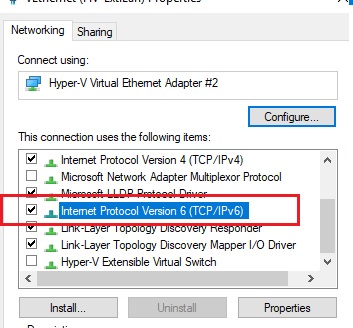 These are the prerequisites for correct port-forwarding. Without the IP Helper service and without IPv6 support enabled, the port redirection won’t work.

You can find out what process is listening to this port use its PID (in our example, the PID is 636):

Let’s try to connect to this computer from a remote system using any RDP client. Port 3340 should be specified as the RDP port.It is specified after the colon following the RDP server address, for example, 10.10.1.110:3340: 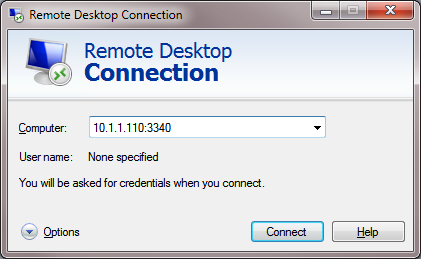 The connection should be established successfully.

Important. Make sure that your firewall (Windows Firewall or a third-party one that are often included into an antivirus software) allows incoming connections to the new port. If necessary, you can add a new Windows Firewall rule using this command:

When creating an incoming firewall rule for port 3340 via Windows Firewall graphical interface, no program needs to be associated with it. This port is only listened by the network driver.

You can create any number of Windows port forwarding rules. All netsh interface portproxy rules are persistent and are stored in the system after a Windows restart.

Display the list of forwarding rules in the system:

Important. This forwarding scheme works only for TCP ports. You won’t be able to forward UDP ports this way. Also you can’t use 127.0.0.1 as connect address.

If you want to forward an incoming TCP connection to another computer, the command can look like this:

Another portproxy feature is an opportunity to make it look like any remote network service is operating locally.

Now if you go to http://localhost:5555/ in your browser, CNN Start page will open. So despite the browser addresses the local computer, it opens a remote page. 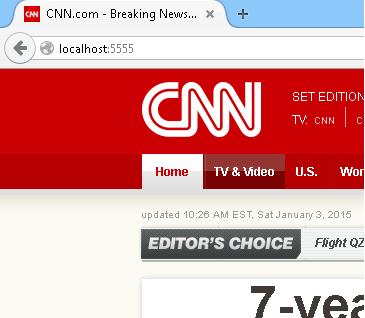 Port forwarding can also be used to forward a port from an external address of a network card to a virtual machine port running on the same computer.

Also, there were cases when in Windows Server 2012 R2 the port forwarding rules worked only until the system was rebooted, and after restart they were reset. In this case, you need to check whether there is a periodic disconnection on the network interface, and whether the IP address changes when the OS boots (it is better to use a static IP). As a workaround, I had to add a script to the Windows scheduler with the netsh interface portproxy rules that run on the system startup.

In Windows Server 2003 / XP, you must additionally set the IPEnableRouter parameter to 1 in the registry key HKLM\SYSTEM\ControlSet001\Services\Tcpip\Parameters.

Extend Volume Blocked by a Recovery Partition on...

[…] In Microsoft Windows, starting from Windows XP, there is a built-in ability to set up network ports forwarding (port forwarding). Due to it, any connection  […]

Hi, this is a good article.
I would like to ask if there is any mechanism to not only forward  but also to copy data? For example, my server listen to TCP port 8845 and will do something when data comes in. I want to keep the original structure but in addition, to copy all coming data and then forward to another server via TCP port 8844. I know to write some codes can do it, but is there any built-in function in Windows Server 2012 can perform this?
Thank you.
George

Do you mean that some application on server processes some way the incoming network data and sends them over the network to another host or modified data is stored locally?

My scenario is: I have a server A to listen TCP 8845 port. There is a program installed in server A to process data when it detects data comes in. What I want to do is to keep the structure in server A, but make a copy to the original incoming data and then send it to server B using TCP 8844 port from server A.
I know we can just write a program to do it, but I want to know if there is any built-in functions in Windows Server 2012 can fulfill my demands.
Thanks.

You have to use rewrites. The easiest way I could do this was to set up an IIS server, download and install ARR, then configure AAR and “URL Rewrite” in the IIS Manager. Took about a day for a software engineer (sys admin novice) to do it and get everything straightened out.

Excellent article.
I would like to isolate all incoming traffic destined for port 80 to say port 8080. But all locally originated traffic for port 80 as it is. Could you please let me know how this is possible (if at all) in WINDOWS server ?

Thanks for this write-up!  Been trying to figure out a particularly problematic issue with a legacy application and hoping maybe this can help.
Can this be used to redirect traffic originating on the local machine and directed to a particular IP address to instead send it to a different IP?  For example, I have an application that is hard-coded to seek data in an archive at IP x.x.x.10, but the data has been moved and now resides at x.x.x.20 (and I can’t just re-IP the new archive location to make it x.x.x.10).  Any thoughts on how to get the application’s requests, even though coming out of the application addressed to x.x.x.10, to instead be redirected and sent to x.x.x.20?  Hope this makes sense…

Thanks for the quick and nice article.  The double quotes in the firewall command appear unicode not ascii.  My command line shell accepts both but makes the two names different.

THIS IS A GREAT WRITEUP!
However, question:
1) Does this work with IPv6?
2) When I’m connected to my VPN (w/ IPv6 enabled, all the ports that I have opened at my router and Win Firewall are now closed, eventho it says “listening on 0.0.0.0”.  So, do I need to forward the ports from 0.0.0.0 to the Local LAN adapter, or from the IP address of the VPN adapter to the local LAN adapter?  Kinda confused about this.
Thanks!

Is there any effective way to adjust Windows Firewall to whitelist IP addresses to the ports created with portproxy?  My WF rules seem to have no effect.

Hi
Could I redirect 80 or 53 to other server?
Ex. My oficial site is hosted in a linux server with the same DNS name at AD server.
If I use primary DNS from AD server on stations, I can’t open my site and applicatons throug DNS hosted on second server.

Hi
I did not understand, do you want to forward HTTP connections for internal clients from AD server to Linux?

PS. You can forward this way only TCP connections (DNS work over UDP potocol).

You are a legend. Thanks for the great article worked like a charm!

Thanks . This is very useful.

It worked for me

Excellent article on the topic. We have In The Netherlands static IP addresses so a DNS is not necessary. But with some routers here (KPN Experia box) . you need to port forward on 2 different places within the router and that can be a real challenge.