IPerf is an open-source tool designed to test network bandwidth between two network nodes. The iPerf allows to generate TCP and UDP traffic/load between two hosts. You can use iPerf to quickly measure the maximum network bandwidth (throughput) between a server and a client, conduct stress testing of the ISP communication channel, router, network gateway (firewall), your Ethernet or Wi-Fi network.

In this article, we will show you how to install and use the iPerf tool to check the network throughput on Windows and Linux CentOS (there are iPerf versions for Android, MacOS, RouterOS from MikroTik and other platforms).

IPerf is a cross-platform tool and doesn’t require installation, just copy and run it on two devices, between which you want to test the network throughput.

There are currently two independent iPerf branches developing in parallel: iPerf2 and iPerf3. The functionality of these tools is mostly compatible, but they use different network ports by default. In iPerf1/2 it is 5001, in iPerf3 it is 5201.

The remaining differences are not so significant, so no need to use a specific version of iPerf (even the CLI parameters are the same). In this article we will use the iperf3.

The iPerf3 is not officially supported for Windows platform, but it works quite fine. I did not notice any obvious bugs. You can send your bug report to the https://github.com/esnet/iperf.

How to Install iPerf on Windows?

You can download iPerf 3.1.3 for Windows from the following link https://iperf.fr/iperf-download.php. If you want to use the iPerf 2.0 – you can get it here. You do not need to install the tool, it is enough to download the iPerf archive and extract it to a local directory on the drive. There are only two files in the archive: cygwin1.dll and iperf3.exe.

There are several iPerf GUI implementations for Windows. For example, Iperf3-Cygwin-GUI or jperf.

The jperf is written on Java (in order to run jperf, the Java VM must be installed on the computer). In addition to graphical form for the CLI interface, Jperf can build graphs bandwidth charts of the communication channel in real time.

To use it, just specify the iPerf server address and run the scan. 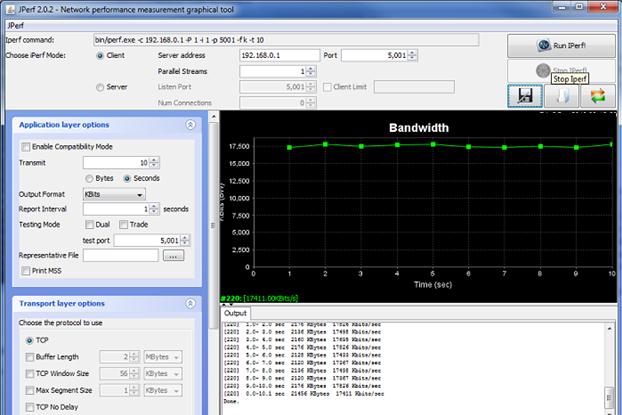 There is a separate iPerfAutomate module in the PowerShell Script Gallery that can be used to get network performance metrics from your PowerShell scripts. You can install the module with the command: Install-Module -Name iPerfAutomate

In CentOS 8, the iperf3 package is included in the AppStream base repository (in CentOS 7 you can find iperf3 in the EPEL repo). You can install it with the dnf (yum) command:

On Debian/Ubuntu distros you can install the iperf3 with the command: 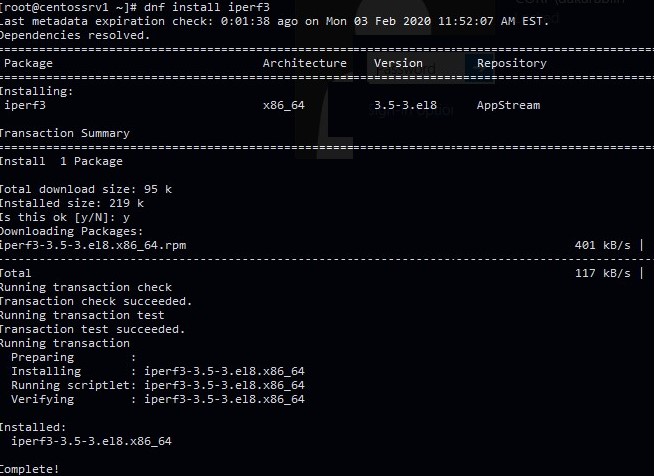 If you want to use your Linux instance as the iperf3 server, you need to open the TCP/UDP ports 5201 in firewalld (iptables):

Let’s look at a few examples of using iPerf to test network throughput. In this example, we will use a Linux CentOS host as the iPerf server. Run the iPerf3 tool in server mode:

The iPerf server is running, it is waiting for connections on the 5201 TCP port.

Depending on the firewall settings between the client and the server, you can change the listening port using the argument -p [port_number]. You can run the iPerf server with a large TCP window size and on a different TCP port. Use the command:

I am using a computer with Windows 10 installed as an iPerf client. Run the command prompt and go to the directory with the iPerf executable:
cd c:\tools\iperf
In order to run a network bandwidth test from the client, specify the iPerf server address (or DNS name):
iperf3.exe -c 192.168.1.200
If you started the iPerf server with an increased TCP window size, you can use the following command to get the maximum network load:

In my example, the test lasted 30 seconds. In the final report, we are interested in the values of the Bandwidth column listed in the last [SUM] line. In this case the average network bandwidth between two hosts is 85.9 Mbit/s. 307 MB of data was transferred (Transfer column) with the symmetric speed (sender=receiver).

Using the -f argument, you can change the speed format (bits, kilobits or megabits). In the continuous tests, when you have to estimate the performance during several minutes (hours), you can set the period of time to display the intermediate results using the –i option.

You can run iPerf in reverse mode (the server sends data, and the client accepts). User the –R option on the client for this.

By default, the utility generates TCP traffic, if you need to check your network bandwidth  for UDP packets, you must use the –u option. In this case, you should start the iPerf server with the command: iperf3 -s –u).

If you need to test your Internet service provider bandwidth, you can use one of the public iPerf servers (iPerf public host list is available here):

If you need to measure the maximum network speed in both directions (in a duplex mode), use the –d option on the client:

During the network test using iPerf, you can monitor your network connection throughput chart through the Task Manager.

It is important to note that, during the test, iPerf uses all available bandwidth of the communication channel between the client and server, which can negatively affect productive apps and users. 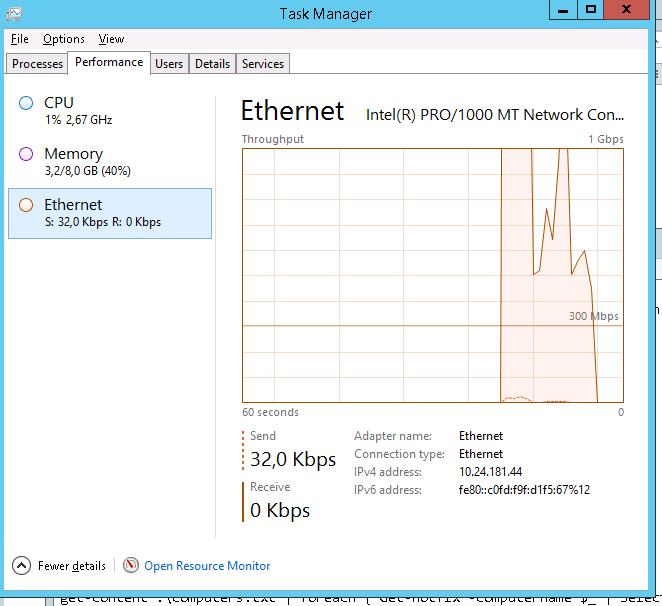 You can display the full list of the options as follows:

Iperf is an easy-to-use and convenient network utility that helps you to measure network connection performance and maximum data transfer speed between two devices.

The major feature differences between iperf 2 vs iperf 3 is that iperf 2 supports latency related tests, video traffic profiles and multicast including source specific multicast while iperf 3 supports sctp tests and json output. The client’s and server’s clocks have to be synchronized to for the latency tests to work. Latency measurements consist of packet latencies, video frame latencies, and and tcp write tor read latencies. Iperf 2 also has a few new metrics per latency which include network power and end/end queue depth (per Little’s law)

I don’t know that iperf 3 is better with UDP. I’ll need to check into that as both tools should provide very similar performance measurements as the tools should be designed to provide accurate metrics.

is the default test using the server or client side hard disks or just memory?