If you see The sign-in method is not allowed error when trying to logon Windows, it means that the resulting Group Policy settings prevent local sign-in for a current user account. Most often the error appears if you try to sign in to a computer using a guest account or to a domain controller using a user account without domain administrator privileges. However, there may be some other reasons.

The list of users and groups that are allowed to interactively sign-in to a computer is configured using GPO.

Also, note that there is another policy to prevent local interactive sign-in to Windows in the same GPO section. The policy is called Deny log on locally. In my case, anonymous local logon under the Guest account is denied on the computer. 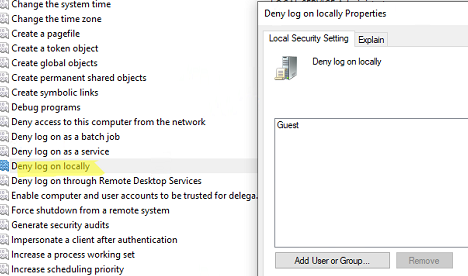 You can prevent a specific group (or a user) to log on to the computer locally by adding them to this policy. Since Deny log on locally policy has a higher priority than Allow log on locally, users won’t be able to log on to a computer with the following error:

One of the best practices to secure privileged administrator accounts in a Windows domain is to deny local logon to workstations and servers under domain administrator accounts. To do it, assign Deny log on locally policy for the Domain Admins group to all OUs except Domain Controllers. In the same way, you need to deny sign-in under local accounts.

In a domain environment, multiple GPOs may be assigned to a computer. So to get the policies allowing local sign-in, you need to check the resulting policy settings. You can use the rsop.msc console or the gpresult tool to get the resulting GPO settings on your computer.

Note that users can use interactive RDP sessions to connect to a Windows device (if RDP is enabled on that device) despite being denied local logon. The list of users who are allowed to log in via Remote Desktop is set in the same GPO section using the Allow logon through Remote Desktop Services option.

In some cases, you may allow a user to log on to the domain controller/ Windows Server hosts over RDP or locally. It is enough to add a user account to the local policy Allow log on locally on your server. Anyway, it will be better than adding a user to the Local Administrators group. However, it is even better to use an RODC domain controller for security reasons.