How to Run a Program as a Different User (RunAs) in Windows 10?

In all supported Windows versions it is possible to run applications on behalf of another user (Run As) in the current session. This allows you to run a script (.bat, .cmd, .vbs, .ps1), an executable (.exe) or an application installation (.msi, .cab) with another user (usually elevated) privileges.

In Windows 10 there are several ways to run a program/process on behalf of another user.

Contents:
The Secondary Log-on service (seclogon) is responsible for the ability to run programs as different user in Windows. If this service is stopped, all of the described RunAs methods won’t work. You can check that the service is started with the following PowerShell command:

How to Run an App as Different User from File Explorer?

The easiest way to run an application on behalf of another user is to use the Windows File Explorer GUI. Just find an application (or a shortcut) you want to start, press the Shift key and right-click on it. Select Run as different user in the context menu.

[alert]Note. If the menu item “Run as different user” is missing, see the next section. 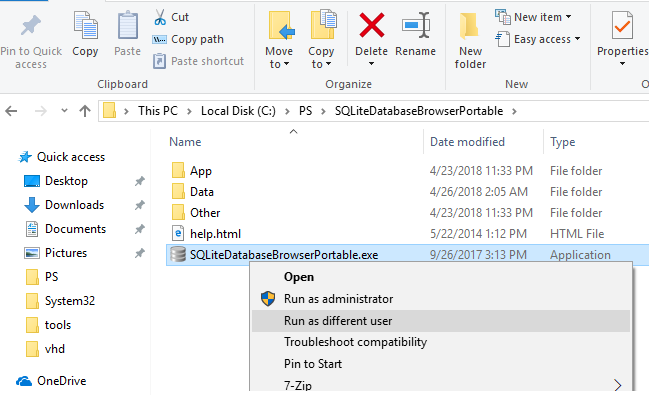 Note. If you need to specify a domain user, one of the following formats of the name is used: UserName@DomainName or DomainName\UserName. 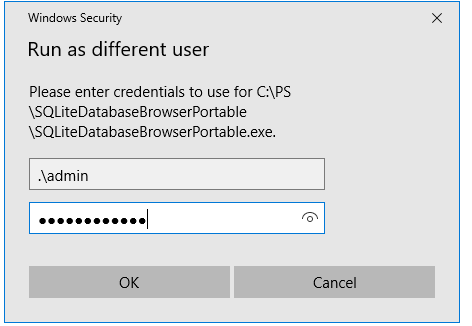 Important. Running the program on behalf of different user is possible if the account has a password. Using RunAs for a user with an empty password won’t work.

Open the Task Manager and make sure that the application is running under the specified user account. 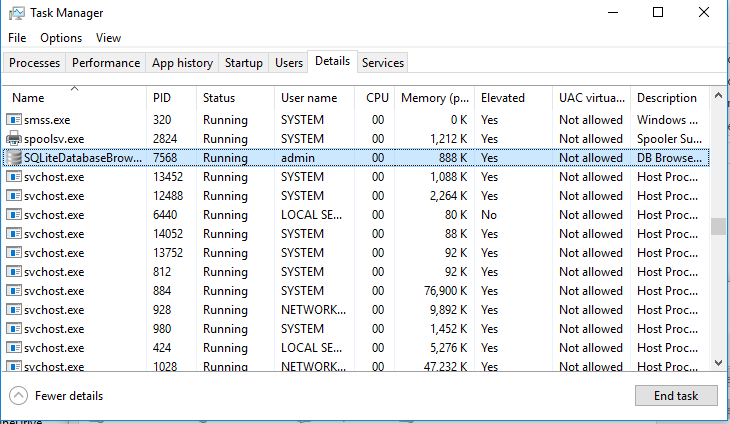 “Run As Different User” Option is Missing in Windows 10

If there is no Run as different user option in the File Explorer context menu, open the Local Group Policy Editor (gpedit.msc) and make sure that the Require trusted path for credential entry policy is disabled (or not configured) in Computer Configuration -> Administrative Templates -> Windows Components -> Credential User Interface. 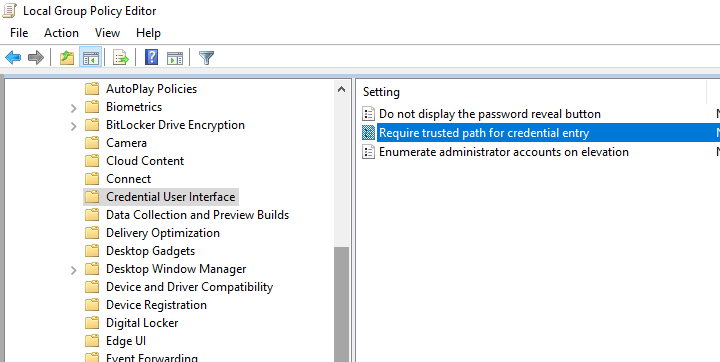 You can use the Windows built-in cli tool runas.exe to run apps applications as a different user from the command prompt. The runas command also lets you to save the user’s password to the Windows Credential Manager so that you don’t have to enter it every time.

Open the command prompt (or the Run window by pressing Win+R). To start the Notepad.exe under the administrator account, run this command:

Tip. If the username contains spaces, put quotes around it: 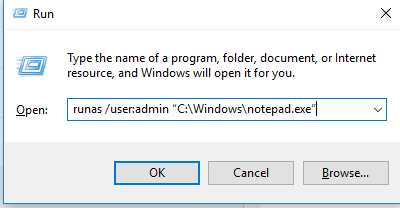 In the next window, the prompt “Enter the password for admin” appears, where you have to enter the user’s password and press Enter.

Your application should open. In my case, this is cmd.exe. The window title says “running as PCName\username“:

For example, you can open the Control Panel under a different user:

Sometimes you need to run a program as a domain user from a computer that is not joined to the AD domain. In this case, you need to use the following command (It is assumed that the DNS server specified in your computer’s network settings can resolve this domain name):

If you don’t want to load user profile when starting the program as different user, use the /noprofile parameter. This allows the application to launch much faster, but may cause incorrect operation of programs that store app data in the user’s profile.

You can save the user credentials (with password) that you enter. The /savecred parameter is used for this.

After specifying the password, it will be saved to the Windows Credential Manager.

The next time you run the runas command under the same user with the /savecred key, Windows will automatically use the saved password from the Credential Manager without prompting to enter it again.

To display a list of saved credentials in Credential Manager, use the following command: 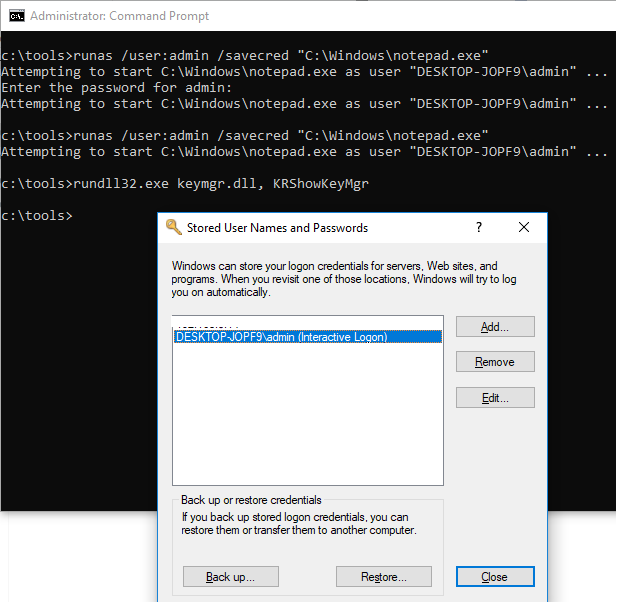 However, using the /savecred parameter is not safe. Because a user, in which profile it is saved, can use it to run any command with these privileges and even change another user password. Also, it is easy to steal passwords saved in the Credential Manager so it is recommended to prevent a Windows from saving passwords (and never save the password of the privileged administrator accounts).

How to Create a Shortcut to Run As Different User?

You can create a shortcut on your desktop that allows you to run the program as a different user. Just create a new shortcut, and specify the runas command with the necessary parameters in the Location field 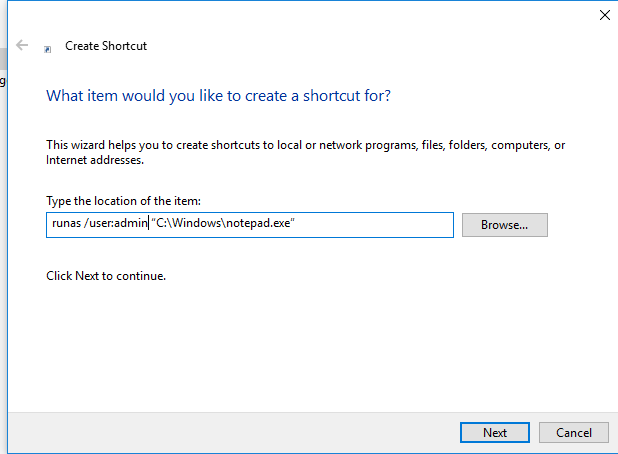 When you run such a shortcut, you will be prompted to enter a user password.

If you additionally specify the /savecred parameter in the runas shortcut, then the password will be prompted only once. The password will be saved in Credential Manager and automatically used when you running the shortcut without prompting for a password.

Such shortcuts are quite often used to run programs that require elevated permissions to run. However, there are safer ways to run a program without administrator privileges, or disable the UAC prompt for a specific application.

How to Run MMC Snap-Ins As a Different User?

In the same way you can run any other snap-in (if you know its name).

Add “Run As” Option to Start Menu in Windows 10

By default in Windows 10 Start Menu items do not have the “Run As” option. To add the context menu “Run as different user”, enable the “Show Run as different user command on Start” policy in User Configuration -> Administrative Templates ->Start Menu and Taskbar section of the Local Group Policy Editor (gpedit.msc).

Or, if the gpedit.msc is missing, create a new DWORD parameter with the name ShowRunasDifferentuserinStart and value 1 in the registry key HKEY_CURRENT_USER\Software\Policies\Microsoft\Windows\Explorer. You can use the following PowerShell command to add the reg parameter:

Update the Group Policy settings (gpupdate /force) and make sure that a new context menu More -> Run as different user has appeared for the programs in the Start menu. 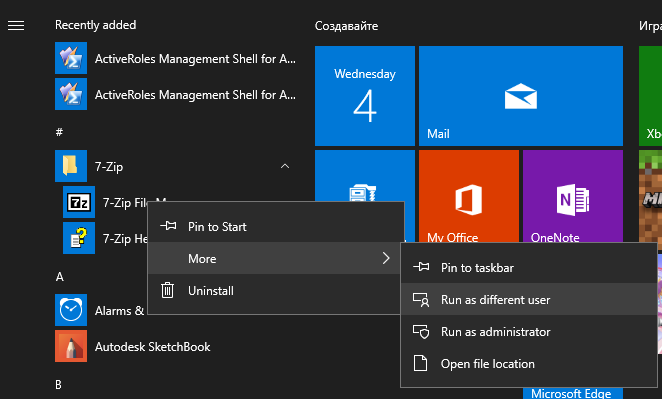 How to Use and Repair Windows Recovery Environment...

How to Use Native SSH Client in Windows...

CHKDSK: How to Check and Repair Hard Drive...

This is perfect article