Windows OS Hub / Windows 10 / How to Run Program without Admin Privileges and to Bypass UAC Prompt?

How to Run Program without Admin Privileges and to Bypass UAC Prompt?

When started, many programs require permission elevation (shield on the app icon), but actually they don’t need the administrator privileges for their normal operation. For example, you can manually grant permissions for your users on the app folder in the ProgramFiles and/or registry hives used by the program. So when starting such a program under regular user account (if User Account Control is enabled on the computer), a UAC prompt will appear and the user will be required to enter an administrator password. To bypass this mechanism, many users simple disable UAC or grant admin privileges to a user on a computer by adding a user account to the local group “Administrators”. Of course, both methods are not safe.

Why some Windows apps not run under standard users and require administrator permissions?

An app may need the administrator privileges to modify some files (logs, configs, etc.) in its own folder in the C:\Program Files (x86)\SomeApp. By default, users don’t have edit (write and modify) permissions on this directory. In order this program to work normally, the administrator permissions are required. To solve this problem, you have to manually grant the modify and/or write permission for a user (or the Users group) on the app folder at the NTFS level. 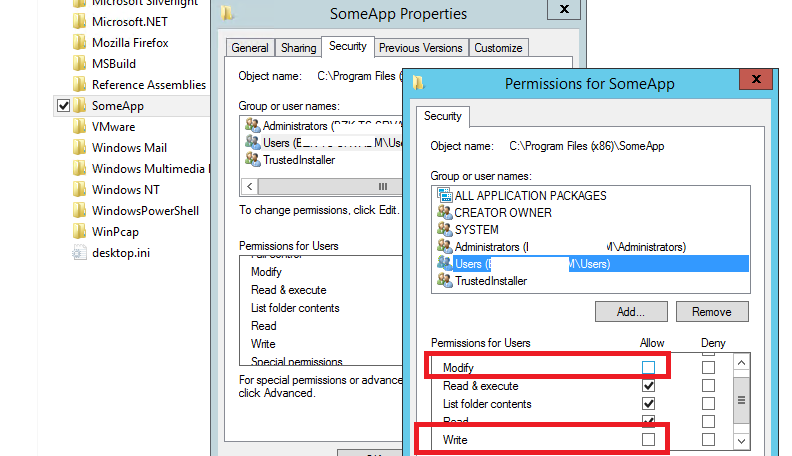 Note. Actually, it is not recommended to store the changing application data in its own folder under C:\Program Files. It’s better to store the app data in the user profile. But it is a question of laziness and incompetence of the app developers.

How to run a program that requires admin privileges under standard user?

Earlier we described how to disable a UAC prompt for the certain app using RunAsInvoker parameter. However, this method is not flexible enough. You can also use RunAs with the saved administrator password using the /SAVECRED option (not safe as well). Let’s consider an easier way to force any program to run without administrator privileges (without entering the admin password) and with UAC enabled (Level 4, 3 or 2 of the UAC slider). 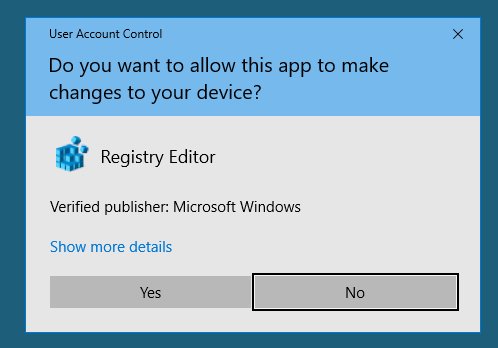 Create the text file run-as-non-admin.bat containing the following code on your Desktop:

To force the regedit.exe to run without the administrator privileges and to suppress the UAC prompt, simple drag the EXE file you want to start to this BAT file on the desktop. 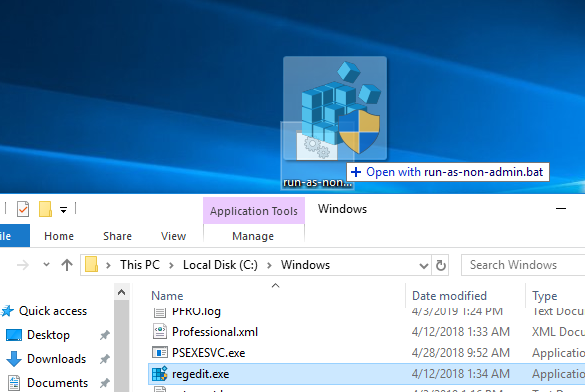 Then the Registry Editor should start without the UAC request. If you open the Task Manager and add the Elevated column, you will see that there is the regedit.exe process in the system without the elevated status (run with standard user permissions).

Try to edit any parameter in the HKLM registry hive. As you can see, a user cannot edit the registry in this registry key (the user doesn’t have write permissions to the system registry hives). But you can add or edit registry keys and parameters in your user branch — HKCU. 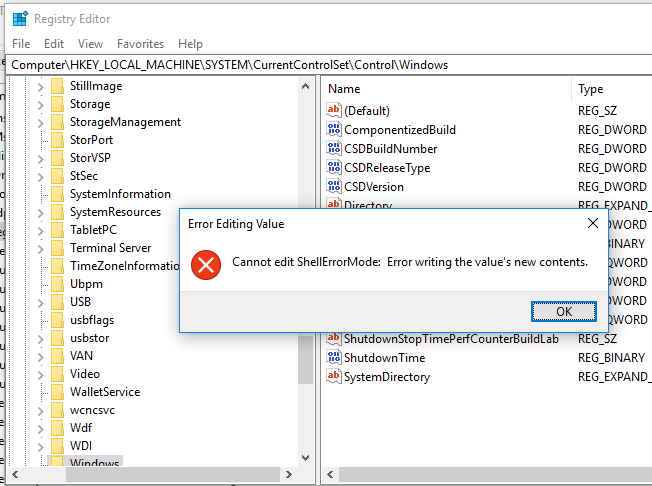 In the same way you can run any app using the BAT file. Just specify the path to the executable file.

You can also add a context menu that allows to run all apps without elevation. To do it, create the following REG file and import into the registry.

After that, to run any application without the administrator privileges, just select “Run as user without UAC privilege elevation” in the context menu.

The environment variable __COMPAT_LAYER allows you to set different compatibility levels for the applications (the Compatibility tab in the properties of an EXE file). Using the variable, you can specify the compatibility settings to be used when starting a program. For example, to start an app in Windows 8 compatibility mode and 640×480 resolution, set the following: 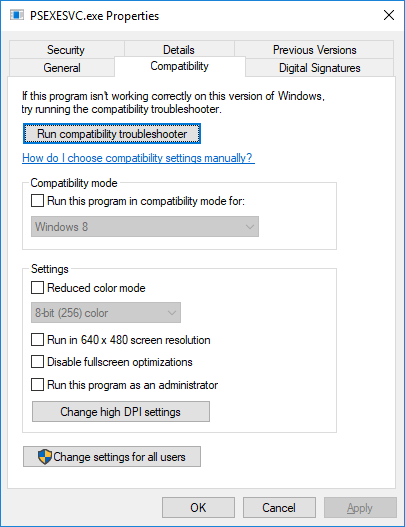 The __COMPAT_LAYER variable has some options we are interested in. There are the following parameters:

It means that the RunAsInvoker parameter does not provide the administrator permissions, but only blocks the UAC window.

How to Troubleshoot, Repair and Rebuild the WMI...

Are you able to help me?
I cannot import the .REG file without having to use an admin Registry Editor, it gives me an error otherwise.

Use the bat file to run your application (instead of the reg file that should be imported into the registry).

So you have to drag and drop your application everytime to launch it?

The whole point is to remove the extra step of clicking yes on the UAC prompt, not replace that with a different step of dragging and dropping.

It is still not working

omg this was way more simple than i thought it would be. used it to run a screen recorder! thanks 😀

Can you also install an exe with this method and then freely use it without dragging and dropping?

Peter, did you ever figure out how to get this working?

Thanks! This article helped me in more ways than you can imagine!

It doesn’t work for all .exe or all setup.exe files.

.bat files say this app can’t run on your pc for me

Different problem, maybe a 32bits program running on 64bits computer or reverse, or maybe you need the compatibility mode (try the troubleshooter)

Doesn’t work. Still requires root password for a given .EXE

Idiot, it doesn’t work for all .exe or all setup.exe files.

No need for insults ya smelly fish man. Perhaps you could elaborate as to why it doesn’t work for some while it works for others? Or maybe just don’t comment at all.

It’s great to get rid of the UAC prompt for specific programs but I still need a way to allow Windows 10 users who only have standard rights to run some legacy applications that require administrative rights to use the program.

You may be able to do what you need using the Task Scheduler method. Look it up, as it will allow you to run a program with elevated privileges.

Where in the registry do you import the REG file? Help pls

Ok, so in “HKEY_CURRENT_USER”: in which specific folder do we need to import the REG file?
In any case, the system blocks the operation by sending me “Imbossible to import… Error during the access to system registry”. So what can I do?

I have the same problem

Hello, Thanks a lot, this is really helpful and amazing for me.
Also, I would like to know after I installed the program but I can’t uninstall or delete some programs that have require permission (shield on the app icon).
Could you please share the method to uninstall without Admin Privileges and to Bypass UAC Prompt, please?
Thanks again.

works very well, thanks ….. apart from a dll error that I am getting during the installation process

it says error: access to path denied C:\\WINDOWS\METASETUP.dll is denied

The installer really needs elevated permissions to access this file. You can change the NTFS permissions for the file under admin account using the ICACLS tool or via File Explorer. Grant Read/Write permissions for your non-admin user.

not working still askin for yes no prompt for uac

Where in the registry do you import the REG file? Help pls

worked perfect thanks a lot

Hello.
I want to activate “Direct Play”.
I manage to access “OptionalFeatures.exe” with the first and 2nd method, but a message is displayed: “an error has occurred. Some functionality has not been modified correctly”.
And with the 3rd method, a message appears: “Unable to import … registry access error”.
Can you help me please?

This program does not have a program associated with it for performing this actions, i cannot run without admin rights nor use recovery media and installation disk. WELP!

…and when going to user accounts said im an admin, confused and dead someone got any solutions!

Not the good type of admin maybe… This happened to me once, I activated default admin account (google it pls I can’t now)

I need some help with this.
I need to run this app as an administrator.
Any way to fix it?

Hello, got the Run as admin.bat file and I copied the code, but when I drag it on top of the System Config App, it still asks for the admin password. I think it might be because the .bat file is actually a text document. Could someone please help me with this? I am trying to get into the System Config so I can disable my Microsoft Family restrictions.

go to the files app and at the top select view and then in the top right will be 3 check boxes, u want to click “File Name Extensions” , now rename it to a .bat and it will change

Bruh the bat file isnt even working it doesnt show gear as it icon its still showing a text icon what to do please help im so close ;(

Okay fixed it but here my new question now what do we save the bat file as and how do we use it to open the uac application, do we have to find the applications exe and use the bat file on the exe to open it?

Should we save as a txt or to all files?

I cant find registry editor’s exe, sorry for so many comments im not much of a computer expert :/

Ok most of my probelms have been sovled now my last question is: after putting in the code in the text document do we have to save it as run as non admin,bat afterwards then do we save it to all files instead of txt? bc its still not working idk why rlly

so it still making me enter in admin information. is there something that i may have done wrong or a way around this