A new version of SMB 3 protocol was introduced since Windows Server 2012 R2 (technically, it is SMB 3.02, since SMB 3.0 appeared in Windows Server 2012). Now you can disable the driver of the legacy SMB 1.0 protocol and block its components from loading. If you disable the SMB 1.0 protocol, the outdated OS versions (Windows XP, Server 2003) and compatible clients (Mac OSX 10.8 Mountain Lion, Snow Leopard, Mavericks, earlier Linux versions) won’t be able to access shared files located on the file servers running Windows 2012 R2 / 2016.

SMB (Server Message Block, sometimes called LAN-Manager) is a network protocol for remote access to files, printers and other network services. The connection uses the TCP port 445. Different versions of the SMB protocol appeared in the following Windows versions:

In the network communication over SMB protocol, a client and a server use the maximum version of the SMB protocol supported both by the client and the server.

The summary table of SMB version compatibility looks like this. Using this table, you can determine the version of the SMB protocol that is selected when different versions of Windows interact:

For example, if a client computer running Windows 7 connects to a file server with Windows Server 2012 R2, the SMB 2.1 protocol will be used.

Tip. You can check the version of the SMB protocol by which the client connects to the server using the PowerShell command:

On the file server side, you can display a list of the versions of the SMB protocols that the clients are currently using. Run the command:

According to the table, Windows XP and Windows Server 2003 can use only SMB 1.0 to access folders and files, that one can be disabled in new versions of Windows Server (2012 R2 / 2016). So, if your infrastructure uses computers running Windows XP ( no longer supported ), Windows Server 2003 / R2 and servers running Windows Server 2012 R2 / 2016, you should understand that the legacy clients will not be able to access files and folders on a file server running new OS. If Windows Server 2016 / 2012 R2 is used as a domain controller, it means that Windows XP / Server 2003 clients won’t be able to execute logon scripts (NETLOGON) and apply some of the group policies stored in the network folders on the domain controllers (for example, when using the Central Store for ADMX templates). If you try to connect to a shared folder on a file server with SMBv1 disabled, the old client will receive the following error message:

The specified network name is no longer available

Today the SMB 1.0 protocol is obsolete and it has a large number of critical vulnerabilities (remember the last incidents with the ransomware attacks – WannaCry and NotPetya that exploited the vulnerability in SMBv1 protocol). Microsoft and other IT companies strongly recommend that you stop using SMBv1 in your network.

If there are clients in your network running Windows XP and Windows Server 2003 /R2, they should be migrated as soon as possible to newer versions of Microsoft’s OS or carefully isolated.

If you open the list of Windows Server 2012 R2 components, you can see a feature with the name SMB 1.0/CIFS File Sharing Support, which is not installed. But the SMB 1.0 driver itself works. If you install this feature, the Computer Browser service appears in the system. This is an SMB 1.0 client, without which it will not be possible to connect from this server to other computers that support only smbv1 protocol. 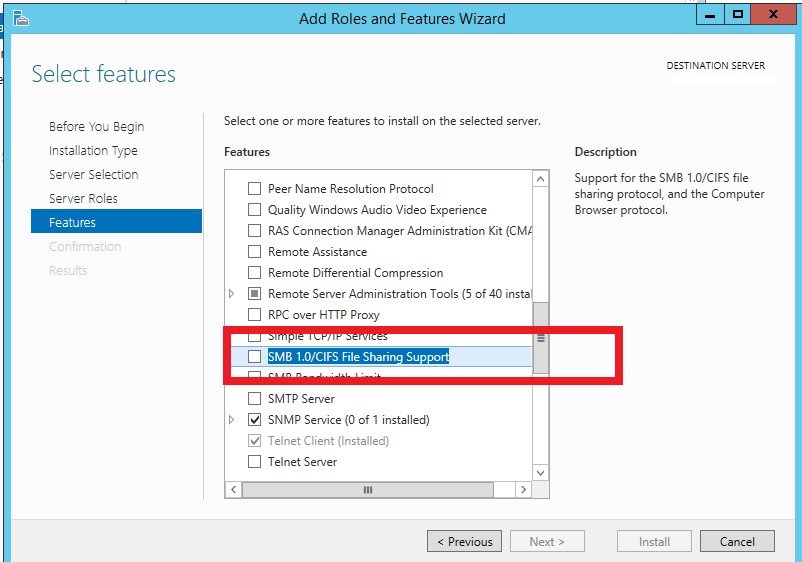 Tip. If you don’t need to support an older SMB version 1.0 for computers running Windows XP or Windows Server 2003, you can disable this feature to reduce the system load and improve security as shown below:

Then on the server side you need to completely disable SMB 1.0 with the command: 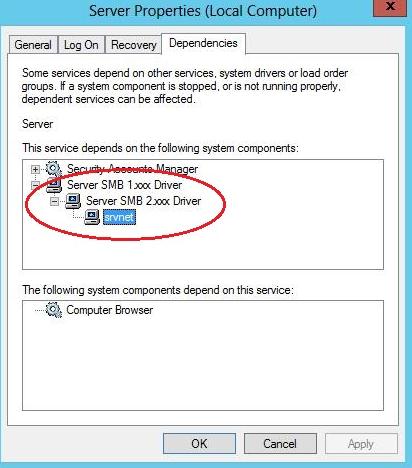 If you open the properties of the LanmanServer service on Windows 2012 R2, you can see that the driver supporting SMB 1.0 is excluded from the dependencies. 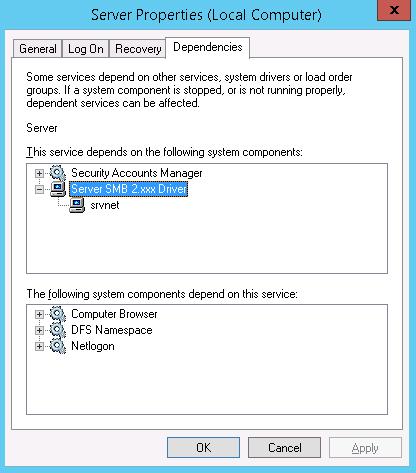 However, this does not mean that the SMB 1.0 driver is not working. To check whether SMB 1.0 is enabled on the server side, you can use the command:

As you can see, the SMB1 protocol in Windows Server 2012 R2 is enabled despite the absence of the SMB 1.0/CIFS File Sharing Support feature and driver dependencies for the LanmanServer service.

To restore the access of XP/2003 (and other legacy) clients over SMB to the file servers/domain controllers on Windows Server 2012 R2, you can enable SMB 1 support as follows. First, enable the protocol in the server settings:

Then enable the dependencies of SMB 1.0 in Windows Server 2012 R2 through the registry. Go to HKEY_LOCAL_MACHINE\SYSTEM\CurrentControlSet\Services\LanmanServer and change the value of DependOnService parameter from SamSS Srv2 to SamSS Srv.

After that you have to reboot the system and make sure that SMB 1.0 driver is working again. 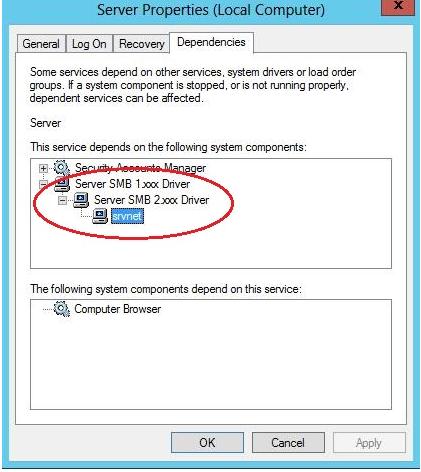 These actions should be performed on all file servers and domain controllers to which legacy versions of clients are connected.

In Windows Server 2016, support for SMB 1.0 on the client side is also enabled as a separate feature, which can be found in the Add/Remove Features Wizard. This component is also called SMB 1.0 / CIFS File Sharing Support. 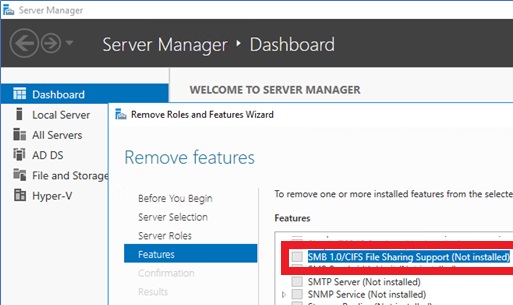 You can disable SMB v1 and completely remove the component with the commands:

Starting from Windows Server 2016 1709 (and Windows 10 Fall Creators), the SMBv1 component (both client and server) is disabled by default (guest access via SMBv2 is disabled as well). To access legacy systems using an outdated version of the protocol, it must be installed separately. You need to install the SMB 1.0/CIFS File Sharing Support feature and enable SMB 1.0 with the commands:

How to access VMFS Datastore from Linux, Windows and ESXi

How to Troubleshoot, Repair and Rebuild the WMI...

your post save my day!!! thank u, i’m gonna reference it on my blog!!!

I have looked everywhere on the web to resolve this issue.  THANK YOU!

Thank you! Got this issue after patching and it worked fine.

Thank you! Saved my day!

Thank you for your comment. Indeed, SMB1 server protocol is available by default on Windows Server 2012 R2. I updated the article

Perfect, just what the doctor ordered. Saved my life and time.

If you are disabling/removing the SMB1 protocol then you need to make the necessary changes in the registry by enabling the dependencies of SMB 2.0 in Windows Server 2012 R2 through the registry otherwise your shares will stop working. Go to HKEY_LOCAL_MACHINE\SYSTEM\CurrentControlSet\Services\LanmanServer and change the value of DependOnService parameter from SamSS Srv to SamSS Srv2. Need to restart the server after this change.

You the best!! always your posts are rich and very clear to understand!!
Many thanks!!