How to Inject Drivers into a Windows 10 WIM/ISO Install Image?

In this article, we will show you how to add the necessary device drivers directly into the Windows installation image. The integration of the device drivers into your offline Windows image is widely used when you need to deploy a large number of workstations and servers on the same hardware. Instead of manually installing specific drivers (including AHCI/ RAID/ NVMe) on each device, you can significantly simplify and accelerate OS deployment process by integrating the drivers directly into the Driver Store of the Windows installation image in the ISO/WIM or the VHD/VHDX file. When installing such an image, the Plug and Play service (PnP) will automatically install the necessary drivers for the detected hardware.

This manual is about the integration of device drivers into a Windows image and can be used both on desktop editions of Windows 10, Windows 8.1 and on Windows Server 2016, 2012 R2.

In modern Windows editions you can add drivers to the installation ISO image in two ways:

In fact, both techniques perform the same operation: add additional drivers into the offline Windows image. How to use it is a matter of personal administrator preference. Let us consider in more detail both ways on the example of integrating drivers into the Windows 10 installation image.

Note. In Windows Server 2008 R2 and Windows 7, it was possible to add a driver to the Windows installation image using the imagex command line tool (included into the WAIK), but it is not supported in Windows Server 2012 and later.
Contents:

How to Inject Driver into a Windows 10 Install Image using PowerShell?

First of all you need to download and place all the necessary device drivers in one directory (for each driver you need to create a separate folder). Please note that many vendors (including Dell, HP) supply their drivers in the form of self-extracting exe or zip archive files. Such archives must be unpacked to local drive so that the directory with drivers contains inf, cat and sys files.

Before you start, create the following directory structure on your local drive:

List all Windows editions contained in the Install.wim file using the Get-WindowsImage PowerShell cmdlet. This is necessary in order to specify the Widows edition into which it is planned to integrate the additional drivers.

In our example, the WIM file contains only one Windows 10 Pro edition with the index 1 (ImageIndex: 1).
Next you need to mount the image of the selected Windows edition in the directory Mount. The Windows image index, which you need to mount, must be specified as an argument of the Index parameter:

After the image is mounted, you can add drivers to it from the Drivers directory using the command:

The Add-WindowsDriver cmdlet will recursively search (the -Recurse parameter) the specified folder for all *.inf files with driver description. According to the description in the inf file, the cmdlet will add the dependent INF, DLL, CAT, PNF, etc. files to the Driver Store of your Windows image. 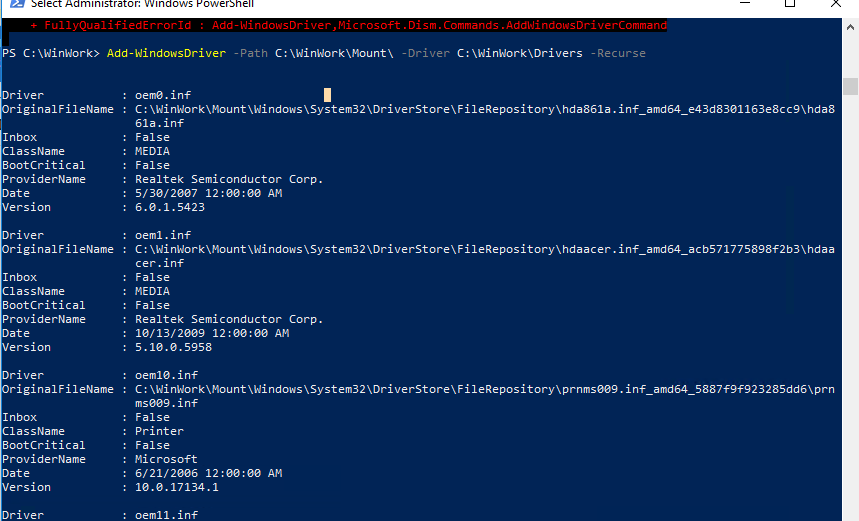 Using the –ForceUnsigned key, you can add to the driver store even an unsigned drivers. Otherwise, you will have to disable the digital signature enforcement or sign the device driver yourself with a self-signed certificate.

So, the drivers are copied, and the current image can be unmounted with saving changes:

In the above example, we added drivers to the Install.wim image file. This is the Windows image that will be deployed to a computer local disk. If you need to add drivers to a Windows boot image (from which the computer boots when you install Windows), you need to add drivers to the Boot.wim file. This is usually necessary when installing Windows, the computer doesn’t detect local hard drives or doesn’t connect to LAN. Usually, only drivers of disk controllers and network adapters need to be integrated into the boot.wim image.

Please note that over time, the driver store folder (%WINDIR%\System32\DriverStore\FileRepository) can grow significantly, so you need to remove unused and old driver versions from driver store periodically.

You can convert your install.wim file containing the Windows installation image with integrated drivers into the install.esd format using the DISM compress option:

It remains to create an ISO file using Dism++ or the oscdimg command and write it to a disk or USB flash drive:

There is no Add-WindowsDriver cmdlet in Windows 7 / 2008R2. It appeared only in Windows 8/ Windows Server 2012 and later, therefore to integrate drivers into an image of Win7/2008 R2, use the DISM tool (see the example below or in the article Adding the USB 3.0 Drivers In Windows 7 Installation).

Now we will show an example of integrating drivers into the install image of Windows Server 2012 R2. If you are building an image on Windows 8.1, you will need to download and install Windows 8 ADK (http://www.microsoft.com/en-us/download/details.aspx?id=30652) to continue working with the latest version of DISM. You need to install the Deployment Tools component.

Run a recursive search and integration of the new drivers into the driver store of the Windows Server 2012 R2 image:

Save the changes to the WIM image:

You may also have to integrate drivers for network adapters and disk controllers into the boot image file boot.wim.

If you need to add drivers to all Windows Server editions contained in the wim file, these operations must be performed for all indexes of OS versions that the command returned: 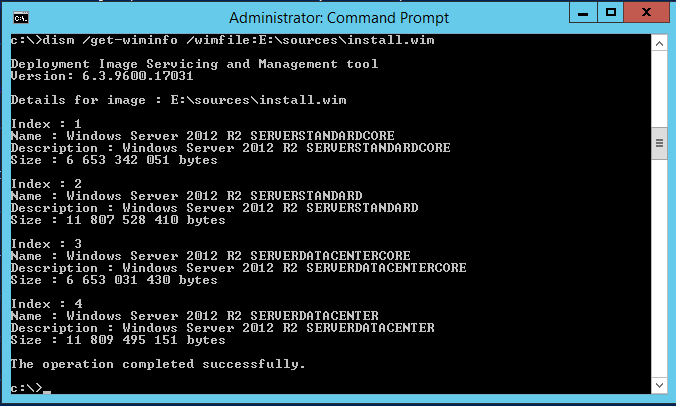 Managing Printers from the Command Prompt in Windows 10 / 8.1

Thanks for posting found it very helpful.

There is a missing double co colon right after SourceImageFile when trying to convert back to install.esd

you got all the paths wrong, it should be c:\winwork\iso you are missing that directory in your sample

I have 3 oddball Windows 10 tablets. I have Windows System Image backups for them, but Windows can’t see them. I just really need the driver’s from the images. Would I be able to extract them from the images using any of the above methods? I’m frustrated and confused at this point. I’ve tried many different things and nothing has worked. I would appreciate any advice. Thanks.

Mount your vhdx file from your Windows System State Backup to a separate drive letter (for instance, e:) and try to export the installed device drivers from your offline image as follow:

Is not a known command-line option.

Excellent tutorial. Thank you.
Just as mentioned by J00D, the path for the creation of the ISO need to be commented.

Where “C:\WinWork\Original\iso\” is the location of the full original content of the ISO. The one expanded at the very beginning.

And you could add to “oscdimg” the parameter “-d” to keep the case definition (lower or upper).

This is a fantastic article!

This is a fantastic guide, but when I tried to install Windows it says that install.esd is corrupted or something and can’t go further.
During the conversion I had no errors.

NVM I used the WIM file and it went well.

Hi great article and very helpful – I have followed all, however, after the following:
oscdimg -n -m -bc:\ISO\boot\etfsboot.com C:\ISO C:\new_win10pro_image.iso
when I use Rufus to create a bootable USB, the final iso created is not accepted as a bootable media – any ideas?

any help or suggestions with once completing your helpful guide, burning the iso to USB? When using rufus I get the following error message:
Unsupported image
This image is either non-bootable, or It uses a boot or
compression method that is not supported by Rufus…