How to Create UEFI Bootable USB Drive to Install Windows 7

Let’s try to create a bootable USB flash drive with Windows 7 distribution for UEFI computer by ourselves. We’ll need the following:

How to manually create a bootable UEFI USB flash drive with Windows 7 installer?

You can create a bootable UEFI flash drive with the correct Windows distribution manually. The procedure described below is suitable for advanced users, is performed from the command line and allows you to fully control (and understand) all the steps in the process of creating a bootable USB flash drive.

Step-by-step guide on how to create a boot Windows 7 flash drive for a UEFI system:

It is much easier for novice users to create bootable UEFI flash drive for installing Windows using the graphical interface of the popular Rufus utility. At the moment, the Rufus 3.3 is available on the developer’s website https://rufus.ie. The utility is quite compact (about 1 MB), doesn’t require installation and it’s completely free. In addition, it works much faster than analogs.

Run the Rufus utility and specify the following settings: 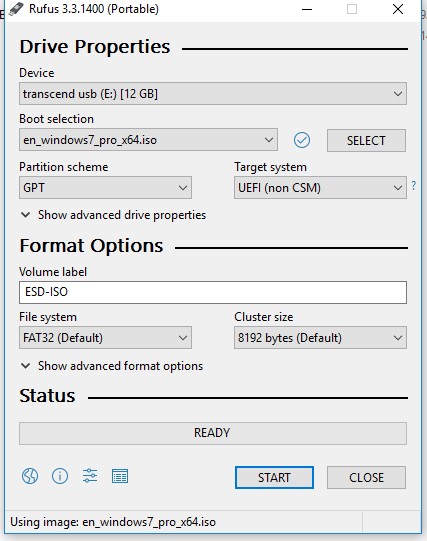 After the described procedures, you have a USB flash drive, using which Windows 7 can be installed on a UEFI system in the native mode (note that, in order to install the operating system in UEFI mode, the hard disk of the computer must have a GPT partition layout). More detailed procedure of Windows 7 installation in a UEFI system will be considered in next article.

Internal SSD/SATA Drive Shows as a Removable in...

How to Disable UAC Prompt for Specific Applications...

Thank you so much for providing this guide!

Using cmd for making bootable usb is advanced methos and so easy also. I always prefer cmd program to make bootable usb. No software is required now only cmd can make usb bootable.

Hi
could you please put more details Go to f:\efi\microsoft\boot on the USB flash drive and Copy its contents to a higher level (to the F:\efi\boot directory). There is not such directory efi\boot. Should I create this? My structure is like that F: \boot\efi\source\support\upgrade etc.
Thank you.

Thank you so much….

Hello there I have a installer disc it installs 32 and 64 bit windows all versions but i don’t have an efi foler in sources\install.wim\1\Windows\Boot
How do I make a uefi usb or disc?

Or use the freeware ISO2Disc. It allows to create a UEFI bootable USB from ISO file.

I agree 100%, after screwing around with partitions, different format schemes and wasting 4 hours of my life I stumbled on ISO2Disc

Holy cow that made life soooooo much easier! Get it, you can’t go wrong its free and it works flawless. I needed it for Server 2016 and UEFI boot

Hi,thanks!
I am able to make USB bootable in UEFI mode but once setup of windows 7 starts copying files then
I get error that a file is missing \windows\system32\boot\winload.efi anyone faced this ? Please help to resolve this.

Did you use the original Windows 7 ISO image? At what stage of the installation does the error appear? Already after you choose a partition to install?

hi, i have a notebook acer A315, the bios has only UEFI, how can i start windows 7 installation from usb stick? thank you so much.

Good evening! My name is george. I have a vision problem and I want your children to help you as much as possible. I use a voice reader in Windows 10 but the voice reader is not compatible with the specific operating system. I try to get back through the bios uefi to legacy so I can install Windows 7. When I start installing it does Windows loading file. Then he asks me the language and when I click on install now he displays the following message:
It says there is a missing cd dvd driver installed via a USB stick.
Settings within the bios are done correctly. Also bios has been upgraded to its latest version and the security boot is disabled.
The computer has been purchased 3 days ago and unfortunately I can not use it.
Its processor is the eighth generation Intel i7.
And the computer model is the following:
hp probook 450 g6
Thanks in advance for your answers!

Windows 7 doesn’t have native USB 3.0 support. You should add USB drivers to the install image manually. See the article: http://woshub.com/adding-usb-3-0-controller-drivers-to-windows-7-install-media/

Thank you for providing this helpful guide, while rufus is the easier way to go i had to use diskpart because i was dealing with fake usb drive with fake capacity. There was no way to specify partition size in rufus. Cheers.